3 Offers Near 20147
Check out current offers on the Toyota 4Runner
VIEW OFFERS
buyatoyota.com

What Should I Pay
11 for sale near you
Ad

Big, boxy and built for off-roading, the Toyota 4Runner is one of the few traditional truck-based SUVs left these days. Sure, there are plenty of family haulers with high ride heights and tall roofs, and some crossovers even spice things up with knobby tires or plastic body panels. But few things are as capable as a truly dedicated SUV.

The 4Runner's rugged underpinnings, high ground clearance, and available four-wheel drive with low-range gearing can help get you pretty far off the beaten path. Want to go even farther? The specialized TRD Off-Road and TRD Pro trims have additional features, such as a locking rear differential and Toyota's sophisticated suspension system called KDSS, that provide even greater capability on rocky terrain.

As a city-based runabout SUV, however, the 4Runner might not be the best choice considering its subpar comfort and fuel economy. A few other newer rivals also offer similar off-road capabilities such as the Land Rover Defender and redesigned Jeep Grand Cherokee. Which one should you get? Read our test team's Expert Rating on the 4Runner to help you decide.

Which 4Runner does Edmunds recommend?

The Trail Special Edition is a great place to start if your 4Runner will only occasionally play in the dirt. Available in either rear- or four-wheel drive, this trim comes standard with a rugged roof rack, cool-looking dark gray wheels and a portable cooler for day trips. But you'll want to get the TRD Off-Road or TRD Pro if you need serious trail-conquering capability.

All come with a 4.0-liter V6 (270 horsepower, 278 lb-ft of torque) and a five-speed automatic transmission. The SR5, Trail Special Edition, SR5 Premium, TRD Sport and Limited trims are available with rear-wheel drive or four-wheel drive (4WD). The other 4Runners have standard 4WD. Five-passenger seating is standard, and a third-row seat is optional on certain trims to boost capacity to seven people.

SR5
Starts you out with:

Every 4Runner also comes with:

Trail Special Edition
Based on the SR5, this trim level adds:

TRD Sport
Based on the SR5, the Sport adds unique styling with a few extra features, such as:

TRD Off-Road and TRD Off-Road Premium
These trims are similar to their respective SR5 trims but have:

Limited
This is the 4Runner's luxury-level trim. It uses a different 4WD system and suspension setup that aims to make it more comfortable. It also comes with:

TRD Pro
The most expensive 4Runner, the TRD Pro is meant for serious off-roaders. It has the TRD Off-Road Premium's standard features plus the sunroof, navigation system and JBL sound system. It also features: 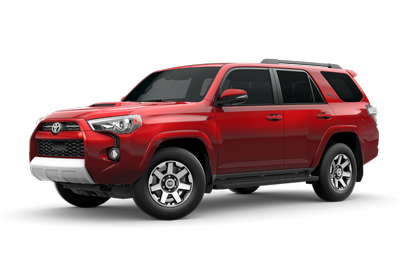 5/5 stars, 4runner Heaven
Larry Eveler , 10/13/2021
Limited 4dr SUV (4.0L 6cyl 5A)
Drives like a car. Such a solid feel and loving all the new safety features. Insurance was actually $98 less per 6 months than my 2018 Highlander! Couldn't be happier.
See all 1 reviews
Write a review
Helpful shopping links

2020 Land Rover Defender vs. Wrangler vs. 4Runner — The New Defender Goes Off-Road With the Big Boys

NOTE: This video is about the 2020 Toyota 4Runner, but since the 2022 Toyota 4Runner is part of the same generation, our earlier analysis still applies.

In this video, see how the new Defender stacks up against the best off-roaders on the market. Our experts evaluate the new 2020 Land Rover Defender on the road and off-road with two of the best and most popular off-road vehicles, the Toyota 4Runner and the Jeep Wrangler. How does the new Defender stack up? Find out in a good old-fashioned off-road comparison test.
2020 Land Rover Defender vs. Wrangler vs. 4Runner — The New ...
2020 Toyota 4Runner TRD Pro — Review, Price, Interior, Off-R...

PRICE CHECKER™
Check a dealer's price
Bring back a dealer's quote, and we'll tell you if it's a good price!
Check your price quote
Price:
$ -
Get started
Ad
Build and Pricetoyota.com
Prototype shown with options using visual effects.

Downhill Assist Control
Improves directional control during descent on steep or slippery surfaces.
Pre-Collision System
Uses radar and cameras to scan the road for people or other objects, alerting the driver. May automatically brake if the driver doesn't.
Dynamic Radar Cruise Control
Uses radar to maintain a set speed and distance to a vehicle in front of you. Will slow down and speed up based on traffic speed.

Toyota 4Runner vs. the competition

Many years ago the Pathfinder was just as formidable off-road as the 4Runner. These days, the Pathfinder is better suited to running errands than it is rock crawling. With three rows of seating, a comfortable ride and a pleasant interior, the Pathfinder has the edge when it comes to day-to-day activities. But if true adventure is your priority, the 4Runner is the better choice.

Subaru's Ascent offers plenty of all-weather capability as well as more off-road ability than you might expect. While it's not going to go all the same places as a 4Runner can, the Ascent offers a higher-quality interior and a generous number of safety features. Going with the 4Runner nets you superior off-road chops and more personality than the Subaru.

Land Rover's Defender has a long history of go-anywhere superiority. It's similar to the 4Runner in that it's focused on off-road performance. But from there it goes a few steps further with a more powerful V6 and V8 engine options, more luxury features and fresher styling than the 4Runner's decade-old design. The new Defender, though, costs significantly more than the Toyota.

Big, boxy and built for off-roading, the Toyota 4Runner is one of the few rock-crawling SUVs left these days. Sure, there are plenty of family haulers with high ride heights and tall roofs, and some crossovers even spice things up with knobby tires or plastic body panels. But few things are as capable as a truly dedicated SUV.

The 4Runner is a body-on-frame SUV that takes tasks such as off-roading very seriously. It offers basic trim levels, but the most desirable variants in the 4Runner lineup offer all kinds of optional extras for getting as far off the beaten path as possible. Items including a locking rear differential and Toyota's sophisticated suspension system called KDSS help set the 4Runner apart from the soft-roading crowd.

For 2022, the 4Runner gets a new TRD Sport trim. Like the TRD Sport version of the Tacoma pickup, the 4Runner TRD Sport includes a hood scoop, color-keyed accents and 20-inch wheels with dark gray accents. It also features the Limited trim's X-REAS suspension, which Toyota says improves the 4Runner's handling.

In the last few years, the 4Runner received significant tech and safety updates, with features including smartphone integration and adaptive cruise control now standard. That said, it hasn't been redesigned in over a decade, and many rivals are more comfortable, more fuel-efficient and easier to drive. There might be a full redesign on the horizon for 2023, but details haven't been released yet.

The 4Runner's truck-based design brings benefits such as impressive towing capability and serious off-road chops. But it's missing the refinement of many of its crossover competitors, even with the updates. The Jeep Wrangler, one of its biggest competitors, was recently redesigned and became much more desirable, and the return of the Ford Bronco is on the horizon too.

More about the 2022 Toyota 4Runner

What do people think of the 2022 Toyota 4Runner?

Consumer ratings and reviews are also available for the 2022 Toyota 4Runner and all its trim types. Overall, Edmunds users rate the 2022 4Runner 5.0 on a scale of 1 to 5 stars. Edmunds consumer reviews allow users to sift through aggregated consumer reviews to understand what other drivers are saying about any vehicle in our database. Detailed rating breakdowns (including performance, comfort, value, interior, exterior design, build quality, and reliability) are available as well to provide shoppers with a comprehensive understanding of why customers like the 2022 4Runner.

Which 2022 Toyota 4Runners are available in my area?

Shop Edmunds' car, SUV, and truck listings of over 6 million vehicles to find a cheap new, used, or certified pre-owned (CPO) 2022 Toyota 4Runner for sale near. There are currently 70 new 2022 4Runners listed for sale in your area, with list prices as low as $40,244 and mileage as low as 0 miles. Simply research the type of car you're interested in and then select a car from our massive database to find cheap vehicles for sale near you. Once you have identified a used vehicle you're interested in, check the AutoCheck vehicle history reports, read dealer reviews, and find out what other owners paid for the 2022 Toyota 4Runner.

Can't find a new 2022 Toyota 4Runners you want in your area? Consider a broader search.