5 Offers Near 20147
Check out current offers on the Toyota RAV4
VIEW OFFERS
buyatoyota.com

Start Price Checker
136 for sale near you
Build and PriceAd
toyota.com

The Toyota RAV4 is one of the best-selling passenger vehicles today. It's easy to understand why: This small SUV has a smooth ride, plenty of space for passengers and cargo, and many standard advanced driver safety features. No doubt the RAV4's long-running status — it debuted all the way back in 1996 as one of the first crossover SUVs — and Toyota's name recognition help too.

But this popularity doesn't necessarily mean it's the best. In fact, we rank a few other small SUVs ahead of the RAV4, including the equally popular Honda CR-V and the upscale Mazda CX-5. If you want a RAV4, we're more inclined to recommend the RAV4 Hybrid or the new RAV4 Prime plug-in hybrid. They are more powerful and easily justify their higher initial cost. Check out our Expert Rating for our in-depth take on the 2021 RAV4.

Which RAV4 does Edmunds recommend?

The RAV4 in midrange XLE Premium trim gets our recommendation. It has enough features and interior upgrades to make it look and feel nicer than supporting models, and delivers it all at a sensible price.

The 2021 RAV4 is available in six trim levels: LE, XLE, XLE Premium, Adventure, TRD Off-Road and Limited. All come with a 203-horsepower four-cylinder engine paired to an eight-speed automatic transmission. Front-wheel drive is standard on most of the trim levels, and those offer all-wheel drive as an option. The Adventure and the TRD Off-Road come standard with an upgraded all-wheel-drive system that can enhance traction on loose and slippery surfaces.

The RAV4 LE trim may be the base model, but you still get a decent number of features that include:

The XLE adds more convenience features such as:

The XLE Premium dresses up the RAV4 with:

The Adventure trim goes without the sunroof and power liftgate but adds some off-road appearance and mechanical elements that include:

The TRD Off-Road trim gets the sunroof and liftgate back and adds more capabilities with:

At the top of the range, the Limited builds on the XLE Premium equipment list and adds:

Some features are available as options on supporting trims. Other notable options are dependent on trim level and include: 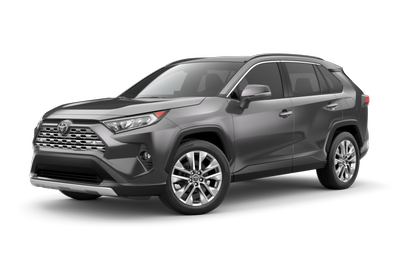 5/5 stars, Best Car I Have Ever Owned
Lester R, 10/19/2020
LE 4dr SUV AWD (2.5L 4cyl 8A)
I have owned so many cars in my lifetime but never a Toyota. I have bought used cars, cars that were just junk and I have bought new cars and most of them have let me down and failed prematurely. My background in the Military required an immense ability for attention to detail and trust me when I say that when something wasn't right with my vehicle, I knew it. Everything from the steering, to braking, to subtle noises and even distinctive smells that should not be coming from under my engine compartment that certainly hinted at trouble to come. That being said, I can honestly say that I was thoroughly impressed with the workmanship and quality that was noticeable immediately when inspecting the exterior and interior of my new Rav4. You can feel it when you are driving in the response of the vehicle the way it handles, the way the steering feels in your hands and the purr of the motor you feel under your feet. You just get the sense that this car is going to last and is a worthy investment of safety and peace of mind. If you are considering a Rav4...don't even hesitate...go drive one and I am willing to bet, you will buy it. They are truly amazing vehicles.
5/5 stars, Love this car!
Eileen in McKinney, 12/22/2020
LE 4dr SUV (2.5L 4cyl 8A)
I love the easy ride and the power to go, go, go. If I need to get on the freeway quickly, this car has the oomph to do it! I love the color (silver) and all the bells and whistles. I plan on keeping this car for a long time.
3/5 stars, RAV4 ways when Cruise Control & LTA is on
deccan, 11/30/2020
Limited 4dr SUV AWD (2.5L 4cyl 8A)
Yesterday we took the RAV4 on a long distance drive to checkout the features. I like the road sign and lane sway warning feature however we observed the car was swaying and appeared to be difficult to control while traveling around 65-75 mph when LTA and Cruise Control were on. I did not use cruise control during the remainder of the trip. This seems to be a known issue .. too bad we did not see this issue when we checked out the numerous video reviews on Youtube ...... https://www.cargurus.com/Cars/Discussion-t89236_ds1096909
2/5 stars, Road Noise a show stopper
Mac, 02/28/2021
Limited 4dr SUV AWD (2.5L 4cyl 8A)
I have just purchased a 2021 Toyota Rav 4 Hybrid and am impressed by the fit and finish.. But that's the end of it... The road noise is way beyond acceptable.I wear hearing aids and have to remove them when driving just to make the noise more bearable.. I recently owned a Ford Edge and it was completely sound proof and a pleasure to drive... This vehicle is going up for sale after just 300 kms of driving... I can't live with this noise any longer... Toyota should know better and should spend some dollars on sound proofing this vehicle ...
See all 44 reviews
Write a review

NOTE: This video is about the 2020 Toyota RAV4, but since the 2021 Toyota RAV4 is part of the same generation, our earlier analysis still applies.

Carlos Lago and Elana Scherr compare four of the most popular and best small SUVs in America to find out which is the best SUV for sale in 2020. In this video, we evaluate the 2020 Toyota RAV4, 2021 Nissan Rogue, 2020 Toyota RAV4 and 2020 Mazda CX-5 to give you all the information you need, including mpg, cargo space, interior features, specs and more. Join us for this ultimate SUV comparison test and find out which of these compact SUVs is the right choice for you and your family.

Pre-Collision with Pedestrian Detection
Detects and warns of potential front impacts, including one involving a pedestrian or cyclist, and automatically engages the brakes.
Blind-Spot Monitoring
Monitors your blind spots for other vehicles, illuminating a warning signal on the outside mirrors.
Lane Departure Alert w/Steering Assist
Monitors the vehicle's position in its lane and corrects steering to avoid unintentionally leaving the lane.

NHTSA Overall Rating 5 out of 5 stars

Toyota RAV4 vs. the competition

The current Honda CR-V has been a top pick since it was introduced in 2017. Even as newer SUVs have risen to challenge it, the CR-V maintains its Edmunds Top Rated status. It may not be all that exciting, but it is significantly better than the RAV4, which suffers with a comparably weak engine and numb steering. Read Edmunds' long-term road test of the Honda CR-V.

The Mazda CX-5 is a bit of a counterpoint to the Honda CR-V in that it's more visually appealing and enjoyable to drive, but it sacrifices ride comfort and cargo space in the process. It's a great choice for shoppers who want something a bit more special. It's positively luxurious and upmarket compared to the RAV4, even though they're similarly priced. Read Edmunds' long-term road test of the Mazda CX-5.

The Hyundai Tucson, like most vehicles in the Hyundai stable, gets you a lot of features for the money. Add in the standard 10-year warranty and it makes a lot of sense for the long haul. We like its smooth ride and intuitive infotainment system, but it could move up the rankings with more cargo space and better fuel economy. The Tucson's base engine is comparably weak against the RAV4's, but at least there's a more powerful option.

Consumer ratings and reviews are also available for the 2021 Toyota RAV4 and all its trim types. Overall, Edmunds users rate the 2021 RAV4 3.6 on a scale of 1 to 5 stars. Edmunds consumer reviews allow users to sift through aggregated consumer reviews to understand what other drivers are saying about any vehicle in our database. Detailed rating breakdowns (including performance, comfort, value, interior, exterior design, build quality, and reliability) are available as well to provide shoppers with a comprehensive understanding of why customers like the 2021 RAV4.

Edmunds members save an average of $2,109 by getting upfront special offers. The estimated special offer price in your area is $27,344.

Edmunds members save an average of $2,324 by getting upfront special offers. The estimated special offer price in your area is $29,459.

Edmunds members save an average of $2,509 by getting upfront special offers. The estimated special offer price in your area is $32,354.

Edmunds members save an average of $2,865 by getting upfront special offers. The estimated special offer price in your area is $33,578.

Edmunds members save an average of $2,619 by getting upfront special offers. The estimated special offer price in your area is $35,949.

Edmunds members save an average of $2,645 by getting upfront special offers. The estimated special offer price in your area is $37,019.

Which 2021 Toyota RAV4s are available in my area?

Shop Edmunds' car, SUV, and truck listings of over 6 million vehicles to find a cheap new, used, or certified pre-owned (CPO) 2021 Toyota RAV4 for sale near. There are currently 249 new 2021 RAV4s listed for sale in your area, with list prices as low as $27,225 and mileage as low as 0 miles. Simply research the type of car you're interested in and then select a car from our massive database to find cheap vehicles for sale near you. Once you have identified a used vehicle you're interested in, check the AutoCheck vehicle history reports, read dealer reviews, and find out what other owners paid for the 2021 Toyota RAV4. Then select Edmunds special offers, perks, deals, and incentives to contact the dealer of your choice and save up to $2,727 on a used or CPO 2021 RAV4 available from a dealership near you.

Can't find a new 2021 Toyota RAV4s you want in your area? Consider a broader search.