Start Price Checker
77 for sale near you
Build & PriceAd
NissanUSA.com

The Rogue is Nissan's best-selling vehicle, and it's also one of the most popular small SUVs on the market. We liked the 2014-2020 Rogue for its utility, passenger comfort and value, though ultimately we found rival SUVs did a better job of emphasizing performance and quality. Now Nissan is looking to better entice you with the introduction of the fully redesigned 2021 Nissan Rogue.

The new Rogue has a more distinctive exterior design, punctuated by a boxier, more squared-off front end and recognizable LED lighting signatures. The biggest change comes to the cabin, especially in the new range-topping Platinum trim level. The previous Rogue used acres of cheap, hard and piano-black plastics. By contrast, the 2021 Rogue Platinum has upscale elements such as a digital instrument panel, quilted leather seats and ambient illumination.

By all measures, the 2021 Nissan Rogue is better than the outgoing model. Though it doesn't claim the top spot in our small SUV rankings, the new Rogue is much more competitive with class leaders that include the Honda CR-V, Mazda CX-5 and Hyundai Tucson.

Which Rogue does Edmunds recommend?

Though the entire Rogue lineup offers strong value, the SV is the standout. It doesn't cost much more than the base Rogue but adds a ton of features, including the ProPilot Assist system (which consists of adaptive cruise control and lane departure mitigation). If you have a more generous budget, the new Platinum trim is also worth a look. It's pricey, but few in the class can match its luxurious quilted leather and luxury-like feature upgrades.

The 2021 Nissan Rogue is a five-passenger small SUV sold in four trim levels: S, SV, SL and Platinum. All are powered by a 2.5-liter four-cylinder engine (181 horsepower, 181 lb-ft of torque) mated to a continuously variable automatic transmission (CVT). Front-wheel drive is standard across the board, and all-wheel drive is available on all trims.

S
The base Rogue S is fairly well equipped, with standard features that include:

SV
The next-level SV is rich with comfort and safety features, including:

SL
The luxe SL gets all of the features of the SV and SV Premium package plus:

The SL Premium package upgrades the Rogue with: 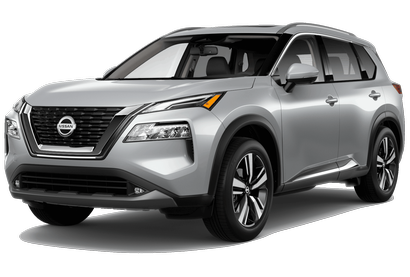 Sponsored cars related to the Rogue

I have been car shopping for some time now, I decided to check out the Rouge platinum and it was incredible! Quiet ride, panoramic roof plus all other bells and whistles. It lacks power when accelerating, but it's a great family SUV!

I am so pleased with my new car! Everything from the Interior, the performance & looks of this car gets a 10/10 from me. Definitely my favorite car i've ever owned so far. Thank you Steven Wilson from the Fontana Nissan dealership for helping me with my purchase, I couldn't be happier.

Well I haven’t purchased the rogue yet but I do test drive it ! My husband and I test drove a Kia Sorento it was nice . We are trying to really take time and make sure we get one that’s right for the family he has a new Chevy truck! So we decided to test a few out that rated well ! So we had to drive to Jamestown NY. Since there’s no Nissan dealer near us in Pennsylvania! There’s one in Hornel NY. But we decided to go to Jamestown those two were the closest. Well we loved the Rogue everything about it ! The looks and the feel . Room is spacious! I’m surprised the one guy wrote he was 6 ft 1 talk and 240 lbs and was cramped because I’ve watched you tube videos on it and the one guy was 6 ft 1 or 2 and he said he was around 240 or 250 those were his words in the video he fit just fine with plenty of room he did adjust the steering wheel so it came out more ! But I know some people say it’s not speedy but I found it fun to me and my husband it’s beautiful that’s for sure and very solid ! I already have everything picked out for it once we test drive a few more ! To see Honda we haven’t yet or Toyota and Hyundai ! That will be it !! But I did look them all up and the Nissan looks so much better but my husband said I just can’t go by looks well I said you can by comfort cuz I honestly don’t know how the others are going to beat the rogue on that !!! A+++++!! Great job Nissan !

So far I'm super impressed with the vehicle. Very comfortable inside and all the tech one can need. That heads up display is fantastic! Enough engine power for most drivers. Only quirky thing I've noticed is the wireless phone charger. My iPhone 12 Pro Max fits nicely but often takes a few times repositioning it to get it to connect and charge. I've not tried a smaller phone yet but will. Overall I'm very happy and impressed with this Rogue!

Blind-Spot Warning
Flashes a light to alert you if there is a vehicle in the car's blind spot.
Rear Cross-Traffic Alert
Works in conjunction with the blind-spot warning system to identify when vehicles are about to cross your path while in reverse.
Rear Automatic Braking
Triggers the brakes if the rear cross-traffic alert system activates and a collision is deemed imminent.

Nissan Rogue vs. the competition

The Honda CR-V is one of the most well-rounded vehicles in the small SUV class. It offers roomy seating, plenty of cargo space, comfortable seats and high fuel economy. It's a great pick overall. But its older design means it has fewer technology features than the Rogue, and its infotainment system is in desperate need of an upgrade.

The Mazda CX-5 gives you a different take on the small SUV formula. Its back seat is tighter than the Rogue's, and its cargo hold is also among the segment's smallest. However, the CX-5 is more enjoyable to drive, especially with its optional turbocharged engine. Even if you don't opt for the more potent engine, the CX-5 impresses with sharp handling and accurate steering.

The Toyota RAV4 is a stalwart in the class, and the newest version — which debuted for the 2018 model year — is the first in a long time that we actually like. It has a beefy 4Runner-inspired exterior and a rugged interior design. That said, the RAV4's cabin isn't as sharp-looking as the Rogue's, and the Toyota's touchscreen software looks a little dated.

More about the 2021 Nissan Rogue

What do people think of the 2021 Nissan Rogue?

Consumer ratings and reviews are also available for the 2021 Nissan Rogue and all its trim types. Overall, Edmunds users rate the 2021 Rogue 4.2 on a scale of 1 to 5 stars. Edmunds consumer reviews allow users to sift through aggregated consumer reviews to understand what other drivers are saying about any vehicle in our database. Detailed rating breakdowns (including performance, comfort, value, interior, exterior design, build quality, and reliability) are available as well to provide shoppers with a comprehensive understanding of why customers like the 2021 Rogue.

Edmunds members save an average of $2,221 by getting upfront special offers. The estimated special offer price in your area is $32,374.

Edmunds members save an average of $1,938 by getting upfront special offers. The estimated special offer price in your area is $27,997.

Edmunds members save an average of $1,870 by getting upfront special offers. The estimated special offer price in your area is $26,375.

Edmunds members save an average of $2,330 by getting upfront special offers. The estimated special offer price in your area is $26,205.

Edmunds members save an average of $1,902 by getting upfront special offers. The estimated special offer price in your area is $24,943.

Edmunds members save an average of $2,616 by getting upfront special offers. The estimated special offer price in your area is $35,409.

Edmunds members save an average of $2,374 by getting upfront special offers. The estimated special offer price in your area is $34,251.

Which 2021 Nissan Rogues are available in my area?

Shop Edmunds' car, SUV, and truck listings of over 6 million vehicles to find a cheap new, used, or certified pre-owned (CPO) 2021 Nissan Rogue for sale near. There are currently 1269 new 2021 Rogues listed for sale in your area, with list prices as low as $25,717 and mileage as low as 0 miles. Simply research the type of car you're interested in and then select a car from our massive database to find cheap vehicles for sale near you. Once you have identified a used vehicle you're interested in, check the AutoCheck vehicle history reports, read dealer reviews, and find out what other owners paid for the 2021 Nissan Rogue. Then select Edmunds special offers, perks, deals, and incentives to contact the dealer of your choice and save up to $2,734 on a used or CPO 2021 Rogue available from a dealership near you.

Can't find a new 2021 Nissan Rogues you want in your area? Consider a broader search.