The GMC Yukon XL has been completely overhauled for 2007. The most notable changes are an even more spacious cabin with upgraded materials, more powerful V8s, available power-folding second-row seats and head curtain airbags.

It's a little heavier than we'd like and it still doesn't have a fold-flat third row, but the 2007 GMC Yukon XL is much more refined than the previous truck. For families who need a full-size SUV with maximum capacity, this GMC's hard to beat.

Cost to DriveCost to drive estimates for the 2007 GMC Yukon XL Denali 4dr SUV AWD (6.2L 8cyl 6A) and comparison vehicles are based on 15,000 miles per year (with a mix of 55% city and 45% highway driving) and energy estimates of $3.36 per gallon for regular unleaded in Virginia.

As one of GM's triplets in its full-size SUV family, the GMC Yukon XL bridges the gap between the somewhat plain Chevy Suburban and the over-the-top Cadillac Escalade ESV. The Yukon XL is essentially a longer version of the Yukon, with a 14-inch-longer wheelbase and an overall length that, at 222.4 inches, stretches some 20 inches longer than the Yukon. The 2007 GMC Yukon XL is completely redesigned and gets more of everything that's important in the large SUV segment: power, cabin space, convenience features and safety equipment.

Compared to newer competitors, the previous-generation Yukon XL was increasingly outclassed in its later years. The new 2007 Yukon XL rectifies nearly all of the previous model's deficiencies. Interior fit and finish is now excellent as soft-touch materials, tight gap tolerances and stylish design are present. On the outside, the 2007 Yukon XL's slab-sided exterior styling is clean, but in profile this GMC looks more Ford than GM. A major benefit of the new look is improved aerodynamics as the Yukon XL slices through the wind nearly as efficiently as some sporty coupes.

Under the skin, the 2007 Yukon XL is still a traditional body-on-frame SUV with a solid rear axle. But the chassis' evolution, though subtle, is significant. GMC claims that body stiffness has been increased significantly, and the old front torsion-bar suspension has been ditched in favor of a more supple coil-spring layout. Recirculating ball steering has given way to a more precise rack-and-pinion system, and the four-wheel antilock disc brakes are larger and more powerful than they were before.

Because of its seating for up to nine, inviting cabin and available Denali trim, we suggest that consumers in need of a traditional full-size SUV take a hard look at the 2007 GMC Yukon XL. Other vehicles in this class, such as the Dodge Durango, Ford Expedition, Nissan Armada and Toyota Sequoia still offer a few advantages. But overall we think the Yukon XL is a compelling choice for those whose passenger and cargo capacity requirements run to the extreme.

GMC offers three V8s in the Yukon XL. Standard on the Yukon XL 1500 (half-ton) is a 5.3-liter V8 making 320 horsepower and 340 pound-feet of torque. Equipped with GM's cylinder deactivation technology, this V8 provides slightly improved fuel economy over last year's engine. A 6.0-liter V8 packing 366 hp and 380 lb-ft of torque comes on the Yukon XL 2500 (three-quarter-ton). For both engines, a four-speed automatic transmission is standard. The Yukon XL Denali features a 6.2-liter V8 (380 hp and 417 lb-ft) mated to a six-speed automatic transmission with a manual-shift mode. Two- and four-wheel drive versions of the Yukon XL are available, except on the Denali, which is equipped with an all-wheel-drive system that doesn't have low-range gearing. Towing capacities for the standard Yukon XLs range from 7,100 pounds on the 1500 2WD to 9,700 pounds for the 2500 2WD.

Stability control (dubbed StabiliTrak) with a rollover sensor is standard, as are four-wheel antilock disc brakes, a tire-pressure monitoring system and the OnStar telematics system. Standard on the SLT and Denali and optional on the SLE are head curtain airbags for all three rows.

For such a big truck, the 2007 GMC Yukon XL is fairly quick, particularly in Denali guise. However, the 5.3 V8 version doesn't feel nearly so quick when carrying a load of passengers, and dipping into the power will quickly pull mileage down to the low teens. The new-for-2007 suspension and steering designs make for more composed handling and a smoother ride than before. But with its hefty curb weight, the Yukon XL doesn't feel particularly nimble around corners. Aimed for the horizon on an interstate, though, there aren't many better cruisers than the '07 Yukon XL. The cabin is quiet at speed, and the ride is comfortably controlled over bumps.

Those used to past Yukon XLs won't recognize the 2007 version with its high-quality materials, fine fit and finish and logical control layouts. Depending on how you equip your Yukon XL, anywhere from six to nine passengers can be transported, and maximum cargo capacity stands at 137.4 cubic feet -- a full 40 cubes more than a Nissan Armada, 9 more than a Toyota Sequoia and a few cubes more than the new Ford Expedition EL. Although the Yukon XL's second row is available with a power-folding feature, the third-row seats must still be removed manually to optimize cargo space, and based on our experience, those seats are heavy and difficult to maneuver. Of course many families will never need to fold or remove the seats in their Yukon XL: With the second-row seat up, there are 90 cubic feet available and nearly 46 with all seats in use.

The 2007 GMC Yukon XL is offered in three well-equipped trim levels: base SLE, midlevel SLT and the top-shelf Denali. Most folks should be happy with the well-stocked SLE. It comes standard with 17-inch alloy wheels, a cloth interior, power windows and mirrors, keyless entry, a front split bench seat (with six-way power driver seat), triple-zone climate control, a trip computer and an audio system with eight speakers and a CD player. The SLT adds leather seating, a six-disc CD changer, power adjustable pedals, remote vehicle starting and rear parking assist. The Denali features a unique grille, 18-inch alloy wheels, XM satellite radio, heated seats (including the second row) and a premium Bose sound system with a six-disc CD changer. Options for the SLE and SLT include heated seats, a power liftgate, rear park assist (SLE) and triple-zone climate control. Options for all trims include a navigation system, power-folding second-row seats, a rear-seat DVD entertainment system, a rearview camera and a power liftgate. Exclusive options for the Denali include a heated steering wheel and 20-inch wheels. 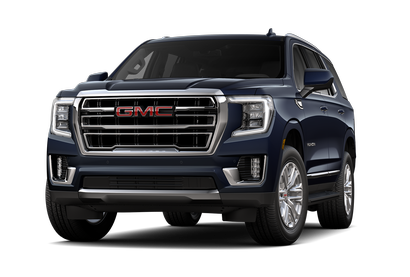 3.25 out of 5 stars
Prepare for service!
gmtruckman,08/15/2011
2007 GMC Yukon XL SLE 1500 4dr SUV w/3SA (5.3L 8cyl 4A)
Very comfortable vehicle but many, many problems with all the little sensors plus the 5.3 liter motor has a major defect and burns oil. GM says 1 quart per 2,000 miles is okay but after 80,000 miles it burns double that. It will even fail inspection for a lean cylinder due to the oil consumption. The services stabilitrack / traction control will also pop on for you on multiple … occasions. The tires monitoring system always needs to be reset, the cruise control works only when it wants too and the vehicle used allot of fuel. They say 13c/19hwy but on average you get 14.9 total.
3.38 out of 5 stars
Oil Consumption & loss of pressure - Recall - Don't Buy
57mechanic,04/22/2011
2007 GMC Yukon XL SLE 1500 4dr SUV 4WD (5.3L 8cyl 4A)
In a nutshell, I'll advise anyone considering purchasing a GM truck with their 5.3 liter aluminum block to stay away. GM doesn't acknowledge the consumption problem & will not rectify it. "Sorry, but until it uses a quart every 1200 miles, it's considered normal." Since brand new, we religiously change oil & filter at 3,000 miles & have records to prove it. It began at 15,000 miles with … "low oil level" alarm. Now.....1.5 quarts every 3,000 miles. Low oil alarm comes on anytime, anywhere but more frequent during freeway driving. Problem #2, "low oil pressure-turn off engine" oil pressure gauge goes to zero. Anytime, anywhere! What a nightmare! We are scared to leave the city with it.
4.75 out of 5 stars
Traded Expedition and love this SUV!
Trish,01/08/2007
2007 GMC Yukon XL Denali 4dr SUV AWD (6.2L 8cyl 6A)
I had two Expeditions before getting the Denali XL. The first Expedition (pre 2003 model) was great. The next Expedition was awful! Which makes the Denali look that much better! I love the space (Expedition lacked terribly), love the look, love the package (I got it loaded out), love everything about it (except of course the MPG... but was expected!). If you are looking for a … wonderful SUV that is large enough to take a family of 5 (3 boys and mom and dad) on vacation yet nimble enough to park in the Walmart parking lot, this is it! Can't give it enough praise!
4.88 out of 5 stars
Great Fun Car!
lulu,01/13/2007
2007 GMC Yukon XL Denali 4dr SUV AWD (6.2L 8cyl 6A)
Purchased this car on 01/02/07 to replace our 2001 Suburban LT 4x4. Demo with 1000 miles on it. Immediately drove from SF Bay area to Lake Tahoe for a week's vacation. Remote start was unbelievable. Start the car from the house, 10 minutes later, the car is warmed up, heat on full, heated seats on, etc. Such a pleasure! Kids love the DVD with wireless headsets, mom can listen to her … music, too! Handles the mountain altitude extremely well - the 6-speed automatic really shifts smoothly on the steep inclines. Much better than the 'Burb. Poor FM reception and distance. Great XM radio, but we need road conditions, etc.
See all 72 reviews of the GMC Yukon XL
Write a review

Which used 2007 GMC Yukon XLS are available in my area?

Shop Edmunds' car, SUV, and truck listings of over 6 million vehicles to find a cheap new, used, or certified pre-owned (CPO) 2007 GMC Yukon XL for sale near. There are currently 1 used and CPO 2007 Yukon XLS listed for sale in your area, with list prices as low as $9,995 and mileage as low as null miles. Simply research the type of car you're interested in and then select a used car from our massive database to find cheap prew-owned vehicles for sale near you. Once you have identified a used vehicle you're interested in, check the AutoCheck vehicle history reports, read dealer reviews, and find out what other owners paid for the Used 2007 GMC Yukon XL.

Can't find a used 2007 GMC Yukon XLs you want in your area? Consider a broader search.