All 1999 models get two new exterior colors, improved speakers and a new head unit for the three-in-one stereo combo. The GLE trim level gets alloy wheels added to its standard equipment list, and all alloy wheels now have a bright finish instead of a painted finish. All SE trim levels are now called SE Limited (SE-L) models and come with additional equipment.

Cost to DriveCost to drive estimates for the 1999 Nissan Altima XE 4dr Sedan and comparison vehicles are based on 15,000 miles per year (with a mix of 55% city and 45% highway driving) and energy estimates of $3.36 per gallon for regular unleaded in Virginia.

When Nissan introduced the Infiniti J30-like Altima in 1993, it was an instant hit. The term affordable luxury became synonymous with Altima, and those who wouldn't have been caught dead in the Altima's predecessor, the unloved Stanza, rushed out in droves to buy this car. Five years passed before the Altima was redesigned, and although it had been a huge seller, it was beginning to show its age.

When Nissan embarked on the redesign, their primary task was to improve on the Altima's original design and to not screw anything up. It looks like they got the formula about half right. Although the second-generation Altima is better in many ways, it doesn't have the attractive looks and luxurious feel that the original car possessed.

First, the good news. The Altima's size has been increased in nearly every dimension. This means that those riding in the back seat are no longer eating their knees, and that there is enough room in the trunk for a family getaway to the mountains. Wood trim accents make the cars look more upscale, and CD players adorn the dash of all but the lowliest models. The interior layout of the Altima is quite functional with easy-to-use buttons and dials for most of the car's secondary functions.

The bad news is that the car no longer looks like a miniature J30. The arse-end of the Altima is now wedge-shaped and rather dumpy, making the car look fat from rear three-quarter angles. Build quality seems to be down a bit as well, the models we have driven don't feel as substantial as the previous model.

The Altima SE trim level has been renamed SE-L, and comes with an equipment package that includes new color schemes, titanium tinted accessories and extra comfort and convenience features.

The Altima is still fun to drive and offers more entertainment for enthusiasts than its less-than-exciting flanks may suggest. Its crisp steering, fully independent suspension with Super Toe Control, and peppy overhead-cam four-cylinder engine provide drivers with the tools to go fast and have a good time.

While the Nissan may exhibit good value, it doesn't necessarily provide even a hint of luxury. Luxury, to Edmund's staff, implies a sort of elegance and craftsmanship that the examples we've sampled didn't have. Nevertheless, the Altima is a good buy that will probably run forever. No one is going to call it a Jr. Infiniti anymore, though. 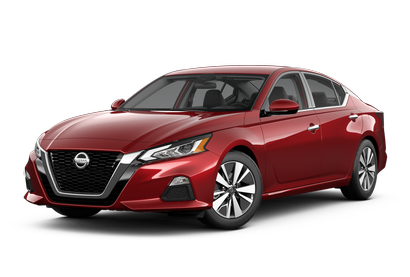 4.75 out of 5 stars
Excellent car
adeelb06,08/17/2012
1999 Nissan Altima GLE 4dr Sedan
I actually drive an SE with a Auto trans. I got the car at 202000 Km. I used it for 4 years and now it has 310000 km on it. Until 280000 this car was running great. Only got regular repairs like brakes and etc. I didn't change the battery or did an alignment or a tune up and this baby runs awesome. 5/5 for both Engine and transmission. The body tends to rust out but who can complain … past 250,000 km. All in all, this is the car if you're a new buyer and need something a bit comfy and still reliable. Comfort level is extraordinary for cars in its class and age.
4.25 out of 5 stars
Nine years and going strong
Happy owner,09/16/2008
1999 Nissan Altima GXE 4dr Sedan
I bought my Altima new. And after nine years it still runs great, has very good acceleration good gas mileage (28 to 29 hwy)and has proven remarkably reliable. At 110,000 I got a tune-up, new front brakes, new belts and a new front tie rod. Since then minor things (AC charge, new radiator) have been needed but still has original clutch, and even the original battery. And yes, the … speakers leave a lot to be desired, and there is occasional wind noise through the windows. But overall Nissan did a fabulous job with this car.
4.38 out of 5 stars
223K Miles and Still Going
altimatelover,03/28/2012
1999 Nissan Altima GLE 4dr Sedan
I have 223K miles and still going. I love this car. I bought it at 12K miles in 2001. It's had very few problems. The only time I had a serious problem was the alternator went at around 170K. The interior plastic is rather cheap though and my visor attachments had problems. Pretty minor stuff. My husband believes in maintenance so we've changed out parts such as tie rods, spark plugs, … radiator (was leaking), CV boot and brakes. Very little maintenance in 11 years. 4 hours in mechanic shop is longest time (alternator). Paint fading, 1 leather seat cracked. At this point the shocks could use replacement, but, even the shocks are better than most cars. 26-29 MPG. Love the Altima!
4.88 out of 5 stars
Best car I have ever owned
josh83,05/04/2013
1999 Nissan Altima GXE 4dr Sedan
I bought my Altima new in 1999, and it now has 240,000 miles. Cranks first time every time, engine still strong, transmission still shifts smoothly. I still love my Altima!
See all 90 reviews of the Nissan Altima
Write a review

More about the 1999 Nissan Altima

Which used 1999 Nissan Altimas are available in my area?

Shop Edmunds' car, SUV, and truck listings of over 6 million vehicles to find a cheap new, used, or certified pre-owned (CPO) 1999 Nissan Altima for sale near. Simply research the type of car you're interested in and then select a used car from our massive database to find cheap prew-owned vehicles for sale near you. Once you have identified a used vehicle you're interested in, check the AutoCheck vehicle history reports, read dealer reviews, and find out what other owners paid for the Used 1999 Nissan Altima.

Can't find a used 1999 Nissan Altimas you want in your area? Consider a broader search.