The 2015 GMC Acadia is essentially unchanged.

With a big cargo hold, a comfortable ride and generous standard features, the three-row 2015 GMC Acadia ably meets the needs of crossover SUV shoppers. It's one of our top picks.

Cost to DriveCost to drive estimates for the 2015 GMC Acadia Denali 4dr SUV AWD (3.6L 6cyl 6A) and comparison vehicles are based on 15,000 miles per year (with a mix of 55% city and 45% highway driving) and energy estimates of $3.32 per gallon for regular unleaded in Virginia.

If your family has outgrown its standard five-passenger vehicle, and you just can't muster the strength to purchase a minivan, you've likely begun to consider a large crossover SUV. With better fuel economy than a truck-based SUV, three-row passenger utility and respectable towing prowess, the 2015 GMC Acadia is quite capable and appealing.

One of the Acadia's signature calling cards is its smooth and quiet ride. Unlike some massive truck-based (body-on-frame) SUVs, it can be driven daily on pitted freeways and uneven asphalt in comfort. Along those highways, you'll be able to carry quite a bit of luggage, too, as the Acadia has one of the most spacious interiors in the class. The Acadia slots between its platform-mates (the Buick Enclave and Chevrolet Traverse) in terms of luxury and price, but it is still considerably well equipped and seriously spacious. And while the Acadia isn't a heavy-duty hauler, it can still tow up to 5,200 pounds when properly equipped, a respectable number in the crossover segment.

Because they're so mechanically similar, the Enclave and the Traverse deserve a look as well. They essentially provide identical capabilities to the GMC with slightly varying equipment and aesthetics. The sporty 2015 Mazda CX-9, the wagonlike 2015 Ford Flex, the handsome 2015 Hyundai Santa Fe or the well-rounded 2015 Toyota Highlander are all worth checking out as well. The 2015 GMC Acadia is right in the mix, though, and it's a great choice if serious cargo capacity, a comfortable ride and seating for eight are your priorities.

Every 2015 GMC Acadia is powered by a 3.6-liter V6 engine. In the Denali it produces 288 horsepower and 270 pound-feet of torque, while in the SLE and SLT trims it produces 281 hp and 266 lb-ft of torque. A six-speed automatic and front-wheel drive are standard, and all-wheel drive is optional.

In Edmunds performance testing of the related Buick Enclave (with 288 hp and all-wheel drive), we measured a 0-60 mph time of 8.6 seconds, which is average among large crossovers with a base V6. Properly equipped, the Acadia can tow up to 5,200 pounds.

Standard safety equipment on the Acadia includes antilock disc brakes, traction and stability control, front seat side-impact airbags, side curtain airbags, a rearview camera and rear parking sensors. All but the SLE-1 also have an innovative front-center airbag that inflates between the driver and right front passenger for additional protection in a side-impact collision.

The SLT-2 and Denali also feature standard side blind-spot monitoring and cross-traffic alert. The Denali comes standard with forward collision alert and lane-departure warning systems, which are optional on the SLTs.

In government crash tests, the Acadia earned a top five-star rating for overall performance, with five out of five stars for total front-impact protection and five stars for side-impact protection. In Insurance Institute for Highway Safety crash tests, the Acadia was given the highest rating of "Good" in moderate-overlap frontal-offset, side-impact and roof strength tests. Its seat/head restraint design was also rated "Good" for whiplash protection in rear impacts.

The 2015 GMC Acadia delivers a nice balance between secure handling and a comfortable ride. Even so, you're always aware that this is a large, heavy vehicle, and it feels a little more cumbersome in the parking lot and around turns than other three-row crossovers.

The V6 engine has enough power to get the Acadia up to speed on the highway but it lacks punch during authoritative passing maneuvers, especially when full of cargo and passengers. It can also sound harsh and unrefined under hard acceleration. In addition, the automatic transmission can be slow to react when a quick downshift is needed, though its gearchanges are at least smooth. Most owners will get used to these characteristics, but if you want more in the way of performance, a CX-9 or Flex is probably more your speed.

The Acadia features an attractive interior, as most of the surfaces you're likely to touch or lean an elbow on are padded and of solid quality. Most three-row vehicles have extremely limited rearward visibility, and the Acadia is no exception. As such, the standard rearview camera is a huge help.

IntelliLink controls the entertainment, phone and navigation functions in most Acadia models. It provides smartphone radio app integration and features a clean layout and intuitive menu structure but it is sometimes slow to process touch inputs (and in a few instances, wholly unresponsive), which can make it frustrating to use.

Front occupants will enjoy abundant head- and legroom, as will most second-row occupants, but the middle row seat cushions are mounted low, reducing comfort for adults. Sliding those seats all the way back alleviates this issue, but effectively kills third-row legroom. Getting to the third row is reasonably easy, even if the second-row slide/release is difficult to access. The third row is actually roomy enough for two adults to fit in comfortably (as long as second-row occupants are generous), though it's realistically best suited for those of smaller stature or children. This is especially true if you want to fit three across.

When it comes to cargo space, the Acadia is definitely a leader in its class. Even with the third-row seats in place, it can carry more luggage than most rivals. Space remains abundant when lowering either the second or third row, as the Acadia offers more cargo space than any crossover apart from its Buick and Chevrolet siblings.

The 2015 GMC Acadia is a large crossover SUV offered in three basic trims: SLE, SLT and Denali. The SLE and SLT are further subdivided into SLE-1, SLE-2, SLT-1 and SLT-2 trims.

That sunroof is optional on all other Acadia trims except the SLE-1. The SLT trims and the Denali can also be equipped with a rear-seat entertainment system that includes a Bose surround-sound audio system, a 120-volt power outlet and a navigation system. 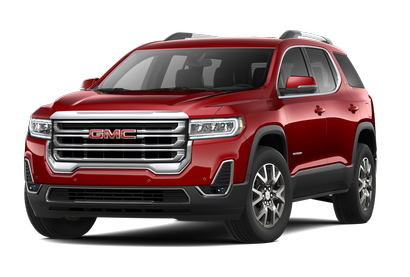 More about the 2015 GMC Acadia

Which used 2015 GMC Acadias are available in my area?

Shop Edmunds' car, SUV, and truck listings of over 6 million vehicles to find a cheap new, used, or certified pre-owned (CPO) 2015 GMC Acadia for sale near. There are currently 51 used and CPO 2015 Acadias listed for sale in your area, with list prices as low as $14,000 and mileage as low as 27739 miles. Simply research the type of car you're interested in and then select a used car from our massive database to find cheap prew-owned vehicles for sale near you. Once you have identified a used vehicle you're interested in, check the AutoCheck vehicle history reports, read dealer reviews, and find out what other owners paid for the Used 2015 GMC Acadia.

Can't find a used 2015 GMC Acadias you want in your area? Consider a broader search.