2006 Chevrolet Equinox appraisal values can range from $980 - $2,930.
Find out what your car is really worth in minutes.
See your car's value

Antilock brakes are standard on all models for 2006. Heated cloth seats are now available on the LT, the LS features body-color fascias and the LT gets body-color rearview mirrors.

The affordably priced 2006 Chevrolet Equinox is one of the better small SUVs available thanks to its flexible interior space, a strong engine and modern styling.

Cost to DriveCost to drive estimates for the 2006 Chevrolet Equinox LT 4dr SUV (3.4L 6cyl 5A) and comparison vehicles are based on 15,000 miles per year (with a mix of 55% city and 45% highway driving) and energy estimates of $3.36 per gallon for regular unleaded in Virginia.

The Chevrolet Equinox is the long-awaited replacement for the Chevy Tracker -- a small, underpowered SUV based on the Suzuki Vitara and Grand Vitara. The Equinox debuted for 2005 and is built at GM's plant in Ontario (a joint venture with Suzuki), but this time it is not a reworked Suzuki and instead shares most of its architecture with the Saturn Vue.

In keeping with traditional Chevy truck thinking, the Equinox will compete against the growing population of mini-SUVs priced under $25,000, but it will be one of the biggest of its kind, thanks to an extra long wheelbase. Inside, it offers innovative storage options and reconfigurable seating that add that extra measure of utility to small SUV ownership. The rear seat slides fore and aft (with a nearly 8-inch range of travel) to make way for larger passengers or cargo, and there is an adjustable cargo tray that doubles as a picnic table.

Its interior dimensions are comparable to those of competing SUVs, but the Chevrolet Equinox holds slight advantages in rear-seat headroom and legroom categories. Maximum cargo capacity is 69 cubic feet, which puts the Equinox right behind the CR-V. Unlike the Tracker, the Equinox will look every bit like a Chevy truck with a prominent bowtie on the front grille and a bold chrome bar across the front. The overall appearance of the Equinox is rather trucklike. The arched rear pillar combined with the flared rear wheel wells gives the vehicle a much brawnier appearance than soft-looking SUVs like the RAV4, CR-V and Liberty, and more on par with the tougher-looking sheet metal of the Ford Escape and Kia Sorento.

Unlike some of the competition, the 2006 Chevrolet Equinox does not offer much in the way of powertrain options. A single 3.4-liter V6 engine is standard on all Equinox models, whether front-wheel drive or all-wheel drive. The rest of the equipment list offers more variety, as the Chevy Equinox can be equipped with safety items like side curtain airbags and traction control, as well as upscale features like heated leather seats, satellite radio and steering wheel-mounted audio controls. Although several small SUVs can match the Equinox's overall package, it's certainly worth consideration if you're looking for an urban runabout with a flexible cabin design and ample passing power.

All Chevrolet Equinox SUVs come with the same 3.4-liter V6 engine. It's good for 185 horsepower and 210 pound-feet of torque. Towing capacity is rated at 3,500 pounds. The Equinox is available in all-wheel-drive and front-wheel-drive configurations, but only one transmission is offered -- a five speed automatic.

Front disc/rear drum brakes with four-wheel ABS are standard. Traction control is optional on front-drive LS models and standard on LTs. Full-length side curtain airbags are optional on all Equinox models. The NHTSA has crash tested the Chevrolet Equinox; the vehicle earned a five-star rating (the best possible) for its protection of front occupants in frontal crashes. It also received five stars for front- and rear-seat occupant protection in side collisions.

The Equinox's 3.4-liter V6 engine has been used in plenty of GM products and has always provided adequate if unrefined power. While driving the Chevrolet Equinox, you can look forward to better-than-average fuel economy. The Equinox's suspension is tuned more for comfort than performance, but some drivers might be put off by the vehicle's slow steering response.

Inside, Chevrolet designers opted for a simple, industrial look with large, clear gauges and faux aluminum accents. While most of the controls are simple in design, the stereo head unit's collection of small buttons is unnecessarily complicated. Thanks to its long wheelbase, the Chevy Equinox offers plenty of room for its occupants, including class-leading rear headroom and legroom. To make way for larger passengers or cargo, the 60/40-split rear seat can slide nearly 8 inches fore and aft. An adjustable rear cargo shelf expands your loading options after a shopping trip and can also function as a picnic table. The Equinox offers 35 cubic feet of luggage space behind its rear seats; fold down the seats and you've got a total of 69 cubic feet.

Like most Chevrolet trucks, the five-passenger Equinox is offered in LS and LT trims, both of which are available with either front-wheel drive or all-wheel drive. Standard equipment on the LS includes 16-inch wheels; air conditioning; a height-adjustable driver seat; cruise control; a six-speaker CD stereo; automatic headlights; power windows, mirrors and locks; an alarm system; and a rear window wiper. The LT adds such features as alloy wheels, foglights and upgraded cloth upholstery. Available options include side curtain airbags, OnStar telematics, satellite radio, an MP3-compatible stereo, leather seating, a power driver seat, heated seats and an auto-dimming rearview mirror. 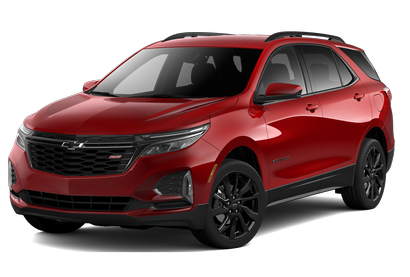 3.88 out of 5 stars
Great dependable car
vitik,08/02/2014
2006 Chevrolet Equinox LS 4dr SUV (3.4L 6cyl 5A)
Bought new in 2006, now approaching 110,000 miles, nothing major went wrong, one warranty repair on front wheel bearings. Great, comfortable ride on highway, huge legroom in the back seat, great utility for roadtrips or just ride to and from work. Did not expect it to last this long or this many miles, but by the way it drives and looks it may make it to 200,000!
4.63 out of 5 stars
Blown head gasket
loulou8,11/14/2011
2006 Chevrolet Equinox LS 4dr SUV (3.4L 6cyl 5A)
The car good the 1st year I bought it and then I started having problems with it running hot. So I took it to the car dealership to have it checked out and they checked it and they told me it was the cooling fans wasn't working which they was. Then the replaced the fans $872.29 and put in a new thermostat included. Then they called me back and told me it was still running hot that the … head gasket was blown. Is there a recall on this type of car.
3 out of 5 stars
Good for 8 years
byrd2160@hotmail.com,04/10/2016
2006 Chevrolet Equinox LT 4dr SUV AWD (3.4L 6cyl 5A)
I loved this vehicle for the first 8 years of it's life. The AWD is amazing and never once had a problem in the snow. It didn't have a lot a fancy bells and whistles but it had good basics as far a technology. But then it started to break down. After I hit 100K little things started to tear up, which I kinda expected. But then on year 7 it started to overheat. I had it worked on a … handful of times and everything we tried ended up not working. Finally after several new fans the problem was solved. Then all the electrical issues started. All the lights on the panels would light up and blink randomly. Then the buttons on the radio stopped working. Then it started stalling at red lights. Then the motor locked up at 10 years old. Apparently the oil pump went out. Not a long lasting kinda vehicle.
5 out of 5 stars
11 years, 140,000 miles and still going strong
JB,12/31/2016
2006 Chevrolet Equinox LT 4dr SUV (3.4L 6cyl 5A)
I recently acquired my Equinox although I bought it new 11 years ago :-) We got this for our daughter when she went off to college, 6 years later as our son was going off to college it was handed down to him. Now my son bought a new car and he has given it back to me, ah the circle of life. In the 11 years our family has owned this car other than normal wear and tear items the only … repair we have done is to replace the windshield wiper motor, not bad :-) Updated 1/3/18 - So I have had the car for a year now. I have spent a few $$$ on it tires, shocks, brakes and tune up but I consider these all consumables. Still going strong
See all 252 reviews of the Chevrolet Equinox
Write a review

More about the 2006 Chevrolet Equinox

What's a good price on a Used 2006 Chevrolet Equinox?

Which used 2006 Chevrolet Equinoxes are available in my area?

Shop Edmunds' car, SUV, and truck listings of over 6 million vehicles to find a cheap new, used, or certified pre-owned (CPO) 2006 Chevrolet Equinox for sale near. Simply research the type of car you're interested in and then select a used car from our massive database to find cheap prew-owned vehicles for sale near you. Once you have identified a used vehicle you're interested in, check the AutoCheck vehicle history reports, read dealer reviews, and find out what other owners paid for the Used 2006 Chevrolet Equinox.

Can't find a used 2006 Chevrolet Equinoxs you want in your area? Consider a broader search.

Should I lease or buy a 2006 Chevrolet Equinox?