Low supply is pushing the market average above MSRP.
What Should I Pay

Jaguar's E-Pace, which is the brand's small luxury SUV, came out for the 2018 model year and gets a few updates for 2021. On the outside it has more distinctive-looking headlights, a new grille and restyled wheels. More significant changes are inside: a new infotainment system and a larger curved touchscreen. The new Pivi Pro infotainment system has a quicker startup time and an easier-to-use interface. Jaguar also says this E-Pace is quieter.

You still get to choose from two turbocharged 2.0-liter four-cylinder engines. The P250 and P250 SE models have an output of 246 horsepower, while the 300 Sport model gets a bump to 296 hp thanks to a boost from a mild hybrid system. That hybrid system increases fuel efficiency just enough that the 300 gets the same EPA-estimated fuel economy as the P250.

The 2021 Jaguar E-Pace is one of the more athletic choices in a very competitive class of small SUVs that includes the Mercedes GLB and GLC, BMW X1 and Volvo XC40. Overall, we think the E-Pace is worth checking out, especially if you prioritize performance and style.

Which E-PACE does Edmunds recommend?

The base P250 comes well equipped, but we think it's worth paying a little more for the P250 SE trim. Its upgrades include more driver aids, sharper-looking headlights and an upgraded infotainment system. To that, we'd add the Dynamic Handling Pack for its adaptive suspension as well as the upgraded Meridian surround-sound system.

The 2021 Jaguar E-Pace is a small luxury SUV available in three trim levels: P250, P250 SE and 300 Sport. Powering the P250 and P250 SE models is a turbocharged 2.0-liter four-cylinder (246 horsepower, 269 lb-ft of torque) while the 300 uses the same engine but adds mild hybrid functionality to increase power (296 hp, 295 lb-ft). Regardless of trim or engine, every E-Pace is all-wheel-drive and has a nine-speed automatic transmission. Highlighted standard features include:

Many of the extra features from the higher trim levels are available as options on lower trims. Other notable options include: 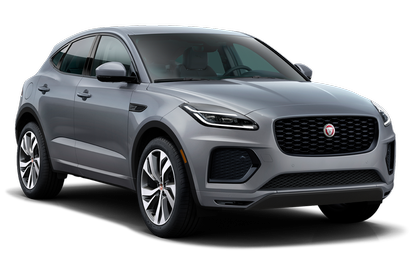 NOTE: This video is about the 2018 Jaguar E-PACE, but since the 2021 Jaguar E-PACE is part of the same generation, our earlier analysis still applies.

Driver Condition Monitor
Monitors driving inputs to detect driver fatigue and uses audible and visual alerts to tell the driver to take a break from the road.
Traffic Sign Recognition
Detects traffic signs using a forward-facing camera and displays symbols in the message center and head-up display for driver awareness.
Surround Camera System
Displays images on the central touchscreen from four cameras positioned around the car, creating a 360-degree view.

Jaguar E-Pace vs. the competition

Much like other Volvos, the XC40 combines eye-catching exterior styling with a thoughtfully designed interior full of premium materials. The XC40 also comes well equipped with advanced driver aids and offers a relatively comfortable back seat. Comparably equipped, the Volvo costs thousands less than the Jaguar, but if you want your luxury SUV to be sporty, the E-Pace will be the better option.

With equal parts style and performance, the X2 represents a unique experience for a small luxury SUV. Based on the BMW's X1, the X2 features a stylish sloped roofline at the expense of a bit of headroom and some cargo space. Both are fun to drive, though the X2 has more power in its M35i trim.

The Nautilus boasts a quiet and luxurious interior and features some of the most comfortable seats in the class. The Lincoln's infotainment system is easy to use, and you can opt for a 335-horsepower turbocharged V6. But the Lincoln is fairly expensive, and when optioned up can cost considerably more than the top-of-the-line E-Pace.

The 2021 Jaguar E-Pace is a small entry-level luxury SUV. After three years in production, Jaguar is giving its cute ute a few slight styling updates, though it would take a keen observer to spot most of them. From the outside, the new signature double-bladed daytime running lights are the main difference. Those familiar with the E-Pace will notice a more significant change on the inside, which primarily adds a new infotainment system and larger curved touchscreen. Otherwise, the E-Pace returns largely unchanged.

What's under the E-Pace's hood?

The E-Pace continues to be offered with a choice of two turbocharged 2.0-liter four-cylinder engines. The P250 and P250 SE models have an output of 246 horsepower, while the 300 Sport model gets a bump to 296 hp, thanks to a boost from a mild hybrid system. A standard nine-speed automatic transmission sends power to all four wheels.

We are disappointed by Jaguar's current and previous infotainment systems. They are generally slow to respond to user inputs, and testing in multiple cars has revealed glitches and crashes that prevent the most basic of interactions. Jaguar promises the new Pivi Pro infotainment system (standard on the P250 SE trim and above) has a quicker startup time, and we hope its revised virtual layout will be easier to navigate. It certainly looks impressive behind the striking new 11.4-inch curved touchscreen. Only a thorough test will reveal if the digital gremlins have been exorcised.

The new system also features twin LTE modems, allowing the E-Pace to stream content and download over-the-air updates simultaneously. Apple CarPlay and Android Auto are standard throughout the lineup, and a wireless charging pad is newly available. Also on the options list is a new feature that projects the image from the rear-facing camera into the rearview mirror. It allows the driver to see what's behind the vehicle even if the rear cargo area is packed to the roof. The typical advanced safety features and driver assistants expected of most premium luxury vehicles are also available.

How economical is the E-Pace?

The base-level E-Pace is priced thousands of dollars higher than other top subcompact luxury SUVs, which is a fairly significant premium when you consider rivals start in the mid-$30,000s. That said, the Jaguar's standard all-wheel drive narrows the gap somewhat. On top of that, the E-Pace lags those competitors in fuel economy, but only by a few mpg, depending on powertrain choice. One bright spot in the value side is Jaguar's warranty, roadside assistance coverage and complimentary maintenance. All are offered for five years/60,000 miles, making the E-Pace more comprehensively covered than the competition.

The Jaguar E-Pace is one of the more athletic choices in a very competitive class of SUVs. If you're a driver who seeks more performance and engagement than the typical luxury crossover can deliver, the E-Pace deserves consideration against our favorites that include the Mercedes GLB and GLC, BMW X1 and Volvo XC40. The updates for 2021 will likely improve the E-Pace's standing, but not to the point where it would surpass the top picks, which we think are more well rounded.

What do people think of the 2021 Jaguar E-PACE?

Consumer ratings and reviews are also available for the 2021 Jaguar E-PACE and all its trim types. Edmunds consumer reviews allow users to sift through aggregated consumer reviews to understand what other drivers are saying about any vehicle in our database. Detailed rating breakdowns (including performance, comfort, value, interior, exterior design, build quality, and reliability) are available as well to provide shoppers with a comprehensive understanding of why customers like the 2021 E-PACE.

Which 2021 Jaguar E-PACES are available in my area?

Shop Edmunds' car, SUV, and truck listings of over 6 million vehicles to find a cheap new, used, or certified pre-owned (CPO) 2021 Jaguar E-PACE for sale near. There are currently 1 new 2021 E-PACES listed for sale in your area, with list prices as low as $52,155 and mileage as low as 0 miles. Simply research the type of car you're interested in and then select a car from our massive database to find cheap vehicles for sale near you. Once you have identified a used vehicle you're interested in, check the AutoCheck vehicle history reports, read dealer reviews, and find out what other owners paid for the 2021 Jaguar E-PACE.

Can't find a new 2021 Jaguar E-PACEs you want in your area? Consider a broader search.

Find a new Jaguar for sale.