Edmunds shoppers get on average $235 more for their trade-in.
Find out what your car is really worth in minutes.
See your car's value

With a wide variety of configurations, a choice of powerful and fuel-efficient gasoline and diesel engines and easygoing driving manners, the 2015 Ford Transit Wagon brings newfound refinement and flexibility to commercial vans.

There's a revolution underway in the commercial-van market, as a new generation of more maneuverable, more economical models replace longstanding van lines that were based on pickup truck platforms. The newest example of this trend is the all-new 2015 Ford Transit Wagon.

Not to be confused with Ford's smaller Transit Connect, the new Transit supplants Ford's long-running E-Series full-size van . In just about every area that commercial van buyers find important, the Transit is an upgrade. Ford offers it in two wheelbases, three roof heights and with three different body lengths. There are three engine choices as well, all of which promise to greatly improve fuel efficiency.

The new Transit Wagon's undercarriage disposes of the heavy and space-robbing ladder frame of traditional commercial vans in favor of a carlike unibody design. This more space-efficient design also results in a reduction in weight (which helps to boost fuel economy as well as towing and gross vehicle weight ratings). With the high-roof body, those more than 6 feet tall can stand upright.

Also improved is the driving experience. The driver and passengers can enjoy an airy, open cockpit with excellent sight lines, supportive seats and even some of the latest technology options. The latter include Ford's MyFord Touch infotainment system, a rearview camera and lane-keeping alert. The Transit Wagon's driver will benefit from more refined mechanicals in the form of vastly more responsive steering and a smooth six-speed automatic transmission (which includes a manual-shift functionality).

Many competitors also offer new vans and, depending on your intended use, each is worth consideration. The Mercedes-Benz Sprinter has been available for some time and essentially ushered in the new, more space-efficient, tall roof commercial van template. It's a fine-driving van, too, and brings Mercedes' earned reputation for durability. But the Sprinter is expensive and doesn't offer the range of body configurations of the 2015 Transit. Nissan's NV Passenger Van stays with a pickup-truck frame and offers an optional V8 engine, which some might find preferable. The Ram Promaster Window Van is perhaps the most radical, as it is front-wheel drive and only comes with front seats, as it's up to the buyer to outfit it as they see fit.

Commercial buyers will need to examine which of these vans works best for their needs. But with its high number of potential body configurations and engine choices, it's likely many will view the 2015 Ford Transit Wagon as the most flexible passenger van for the widest range of uses.

The 2015 Ford Transit Wagon is offered in XL and XLT trims that are broadly differentiated by some standard convenience features. There are standard- and long-wheelbase models as well as low-, medium- or high-roof body styles. An extended-length body can be had on the long-wheelbase chassis. The base Transit Wagon is the 150, but there's also the heavy-duty Transit 350 with increased payload capacities. Passenger capacity ranges from eight all the way up to 15, depending on body style.

There are numerous prep packages for the 2015 Transit Wagon -- ranging from school bus packages to ambulance prep -- as well as a variety of choices for seating and colors.

The 2015 Ford Transit Wagon is an all-new model.

The 2015 Ford Transit Wagon's base engine is a 3.7-liter V6 good for 275 horsepower and 260 pound-feet of torque. For more power, the Transit can be fitted with a turbocharged 3.5-liter V6 that generates 310 hp and 400 lb-ft of torque. Also available is a turbocharged 3.2-liter diesel-powered inline five-cylinder rated at 185 hp and 350 lb-ft of torque. This engine isn't available for the Transit Van 150. All Transits come with a six-speed automatic transmission that sends the power to the rear wheels.

Payload and towing capacities vary depending on the model, but can be as high as 4,650 pounds for payload and 7,000 pounds for towing, when properly equipped.

Because of the rules governing commercial vehicles, only a few versions of the 2015 Ford Transit Van will have EPA fuel economy ratings, but greatly improved fuel economy should be a given for most configurations of the Transit Van compared to the old E-Series. The 3.7-liter V6, when fitted as the regular-length wheelbase Transit passenger wagon is EPA rated at a combined 16 mpg (14 city/19 highway). The same model powered by the 310-hp turbocharged V6 is good for the same numbers.

The first thing drivers will notice is that the 2015 Ford Transit Wagon responds to its steering wheel in a way no truck-based van has before. The steering responds easily and gives feedback more like a family car than a full-size truck. A relatively tight turning circle is another welcome attribute of the new Transit.

The Transit's standard 3.7-liter V6 has respectable power but probably wouldn't do for those planning to frequently transport a lot of passengers. The turbocharged V6 is a different animal, able to effortlessly propel a fully loaded Transit. The new 3.2-liter diesel -- Ford's first use of this engine in the United States -- is quiet, gutsy and, like the other two engines, cooperates almost invisibly with the standard six-speed automatic transmission.

Agreeable, smooth engines and well-managed wind noise make the Transit's cabin noticeably quiet, although pelting rain hammers the roof and can make noise in the wheelwells. And for those ultra-long versions of the Transit, the optional rearview camera is a boon.

Compared with the old E-Series commercial vans, the 2015 Transit Wagon's interior is almost as much a step into the contemporary as ditching a flip cell phone for an iPhone.

Forget that massive step up and in: The first step into the Transit still is up, but you no longer have to pick your feet over a wide and inconvenient sill covering the frame. And the old-school van seating position now is friendlier and much more like a conventional vehicle. With the tall center console, close-at-hand gear selector and likewise easily accessed climate and radio controls, the interior design is more family crossover than commercial vehicle. Those who've driven an E-Series or other old-school American full-size van will be astonished by just how much more welcoming the Transit's interior is, even with its unapologetically utilitarian trimmings.

Springing for the Transit Wagon's XLT trim is worth the cost merely for the cloth upholstery and cruise control, we'd reckon, particularly if you plan to use the Transit on long highway hauls. Passenger-seat layouts run the gamut, depending on the length of the Transit Wagon. The standard setup is for eight, with the option for 10 on the regular-wheelbase models. Move to the long wheelbase and there is the option for 15-passenger seating, which is standard if you select the long-wheelbase/extended-length Transit Wagon. It's easy to maneuver to the back rows of seating in the 10, 12 and 15 passenger Transit Wagon thanks to spaces between the seats, but final row of seating has four very narrow seats, so don't plan on putting full-size adults back there.

The new Transit brings several welcome new features for rear passengers. First, there's an aisle between the rows rather than forcing passengers to shuffle rearward between the seats and the body of the van, making it much easier to access seats farther to the rear. All seatbelts now are a three-point design anchored to the seat frame, eliminating belts dangling from the roof. And there are standard side curtain airbags running the length of the passenger area, improving side impact and rollover safety. 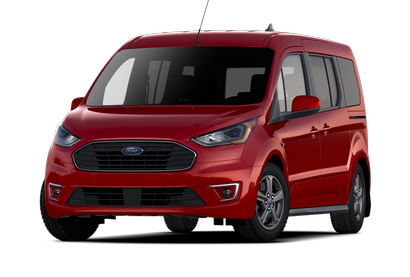 More about the 2015 Ford Transit Wagon

What's a good price on a Used 2015 Ford Transit Wagon?

Which used 2015 Ford Transit Wagons are available in my area?

Shop Edmunds' car, SUV, and truck listings of over 6 million vehicles to find a cheap new, used, or certified pre-owned (CPO) 2015 Ford Transit Wagon for sale near. There are currently 8 used and CPO 2015 Transit Wagons listed for sale in your area, with list prices as low as $15,497 and mileage as low as 44451 miles. Simply research the type of car you're interested in and then select a used car from our massive database to find cheap prew-owned vehicles for sale near you. Once you have identified a used vehicle you're interested in, check the AutoCheck vehicle history reports, read dealer reviews, and find out what other owners paid for the Used 2015 Ford Transit Wagon.

Can't find a used 2015 Ford Transit Wagons you want in your area? Consider a broader search.

Should I lease or buy a 2015 Ford Transit Wagon?