The 2012 Honda Insight receives a mild refresh. Exterior changes include a new grille design, restyled front and rear bumpers, redesigned headlights and brake lights and slightly wider tires for more confident handling. Inside there is a reconfigured rear seat area (with 0.5-inch more headroom and better visibility), a redesigned gauge cluster, and reshaped cupholders that hold larger drinks. The EX and LX models also get upgraded upholstery and a more supportive front armrest.

All Insights get added noise insulation and a newly upgraded optional navigation system. A rearview camera is now available (packaged with the navigation system), and engine and transmission tweaks provide a fuel economy gain of 1 mpg in both city and highway driving.

While fuel-efficient and reliable, the 2012 Honda Insight doesn't measure up to its archrival, the Toyota Prius.

Cost to DriveCost to drive estimates for the 2012 Honda Insight EX 4dr Hatchback (1.3L 4cyl gas/electric hybrid CVT) and comparison vehicles are based on 15,000 miles per year (with a mix of 55% city and 45% highway driving) and energy estimates of $3.36 per gallon for regular unleaded in Virginia.

Relaunched a few years ago, the Honda Insight is one of the granddaddies of the hybrid segment. The fact that its sales over the years have paled relative to those of the segment's other founding father, the Toyota Prius, says a lot about what most Americans want from their hybrids.

The 2012 Honda Insight has some things in its favor. One is its low price tag; with a starting price of less than $20 grand, it's the most inexpensive hybrid on the market, though not by much now that the new Prius C is around. Another is its performance at the gas pump. Though its mileage doesn't top that of the supremely frugal Prius (standard version or the C), the Insight bears the distinction of being one of the most fuel-efficient models in a segment known for fuel efficiency.

This Honda's primary weakness concerns ride comfort. While it offers a less isolated and more engaging driving experience than the Toyotas, the Insight doesn't feel nearly as refined on the road, thanks largely to a suspension that's less forgiving over broken pavement. It also comes up short in utility. It trails both Prius models in cargo capacity, and although 2012 upgrades leave it with an ever so slightly roomier backseat, its second row remains less spacious than theirs.

If you're one of the many hybrid owners who take special pleasure in cruising along solely on electric power, you should know that's impossible in the Insight, since its "mild hybrid" setup doesn't allow the car to travel on electricity alone. And this setup comes with another drawback: air-conditioner shut-off when the car stops, which can lead to sticky times in hot weather.

Overall, the 2012 Honda Insight isn't a bad pick for affordable transportation. Still, most buyers will be better served by either the comparably priced Toyota Prius C or roomier but more expensive standard Prius, given their superior versatility and refinement. You might also want to consider Honda's own Civic Hybrid, which is a nicer car to drive and actually returns slightly better fuel economy.

The 2012 Honda Insight's hybrid system consists of a 1.3-liter four-cylinder gasoline engine and an electric motor paired with a nickel-metal hydride battery pack. The gas engine is good for 88 horsepower and 88 pound-feet of torque, while the electric motor chips in 13 hp and 58 lb-ft. Due to varying power peaks, the maximum combined output is 98 hp and 123 lb-ft of torque. Power flows to the front wheels through a continuously variable transmission (CVT).

At our test track, the Insight accelerated from zero to 60 mph in 10.9 seconds -- a few tenths slower than the Prius, but a substantial 2.6 seconds quicker than the glacial Civic Hybrid. EPA-estimated fuel economy is 41 mpg city/44 mpg highway and 42 mpg combined.

In Insurance Institute for Highway Safety tests, the Insight received the best possible rating of "Good" in frontal-offset and side crash tests.

Because of its "mild hybrid" setup, the 2012 Honda Insight feels more like a traditional gas-only car than the Prius; there's no transition between electric and gasoline modes since the Insight's engine is assisted by its electric motor rather than working in tandem with it. For some drivers, this may be an advantage.

Its responsive steering and relatively sporty suspension tuning make the Insight more fun to drive than the Prius. However, it is noticeably less engaging than non-hybrid yet still fuel-efficient models like the Ford Fiesta and Mini Cooper. Ride quality suffers over rough surfaces, and even the smallest pavement imperfections are transmitted to the cabin. Excessive road noise has long been an issue with the Insight but the situation sees some improvement for 2012, thanks to improved noise insulation.

The Insight's cabin has a spare feel, and doesn't aspire to transcend the car's low price tag. This is particularly noticeable in the base model, which lacks a front armrest and has just two speakers for the stereo. Though rear headroom sees a slight improvement for 2012, the Insight still trails the Prius when it comes to headroom and legroom in the second row.

On the positive side, the Insight's controls are quite simple to use and the standard automatic climate control is appreciated. Also, the visual aids offered by the Insight to help encourage fuel-efficient driving are a nice touch. As your long-term fuel economy improves or declines, the background color of the speedometer changes, and the trip computer rewards or chastises you with images of growing or wilting trees.

The 2012 Honda Insight is available in three trim levels: base, LX and EX. 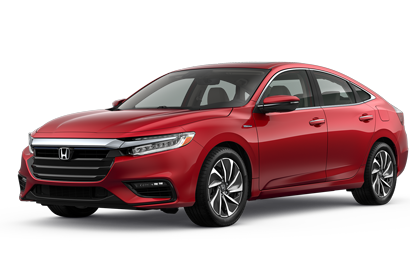 4.5 out of 5 stars
2012 Insight EX with Navi
john57110,12/21/2011
2012 Honda Insight EX 4dr Hatchback w/Navigation (1.3L 4cyl gas/electric hybrid CVT)
I recently purchased a Black Insight EX with Navi after careful comparison with the Prius. I concluded that the Insight is a much better value, ($10,000 less than top of the line Prius, although it doesn't offer quite as many options) and is much more enjoyable to drive. I purchased this as a commuter car (60 mile round trip to work) and for running errands. I consistently avg 45mpg … (calculated by fuel up to miles driven). Overall I am very pleased with this vehicle and believe it would have see better sales if it was marketed better. Also, contrary to Edmunds review this car is capable of electric only operation although in very limited circumstances (flat level ground under 25 mph).
4.63 out of 5 stars
Honda's Gift to the World
swarfer,03/25/2012
2012 Honda Insight EX PZEV 4dr Hatchback (1.3L 4cyl gas/electric hybrid CVT)
The Insight is a essentially a super efficient fwd conventional automobile. The hybrid system is a small DC motor/generator is wound around the output shaft of the engine and provides power for acceleration and recharges the battery when coasting. Streamlined and somewhat narrow, big and unusually tall folks will not be comfortable. Soccer moms will find the hatchback storage too small. … The interior is crisp and functional but upscale buyers will likely opt for something more sophisticated. The Insight is capable of 50+mpg but hyper milers will want more. For me, it is a brilliantly simple design that is affordable, economical, beautiful and a pleasure to drive.
4.5 out of 5 stars
Excellent Value and Fun to Drive
swarfer,09/28/2013
2012 Honda Insight EX 4dr Hatchback (1.3L 4cyl gas/electric hybrid CVT)
This is my second review after one year. I'm averaging 48-49 mpg but routinely get 60+ during ideal conditions. To get the most out of the Insight you need to drive it correctly otherwise you will be disappointed. The Insight is a very efficient conventional automobile with hybrid assist. It is very affordable being less complicated than the Prius. As an engineer I find the Insight … brillaintly simple while the Prius is more a technological feat. Note that if climate control is in auto the engine will start as necessary at stoplights to maintain the desired temperature. This has been incorrectly reported in a number of reviews. No problems and I would buy again without reservation.
5 out of 5 stars
Honda Insight Base
steve190,04/29/2011
2011 Honda Insight 4dr Hatchback (1.3L 4cyl gas/electric hybrid CVT)
Fun car for the money, yeah you won't win any races with it but that is not what it was designed for. If you are looking for a car that is reasonably fun to drive and great on gas if you drive it right check out the Insight. You can do better on mileage with the Prius but you will also pay more for it and in my opinion the Honda drives and handles much better. Try them both and decide … for yourself. Excellent value for a hybrid! Loving it so far!
We have a limited number of reviews for the 2012 Honda Insight, so we've included reviews for other years of the Insight since its last redesign.
See all 33 reviews of the Honda Insight
Write a review

More about the 2012 Honda Insight

Which used 2012 Honda Insights are available in my area?

Shop Edmunds' car, SUV, and truck listings of over 6 million vehicles to find a cheap new, used, or certified pre-owned (CPO) 2012 Honda Insight for sale near. Simply research the type of car you're interested in and then select a used car from our massive database to find cheap prew-owned vehicles for sale near you. Once you have identified a used vehicle you're interested in, check the AutoCheck vehicle history reports, read dealer reviews, and find out what other owners paid for the Used 2012 Honda Insight.

Can't find a used 2012 Honda Insights you want in your area? Consider a broader search.