Start Price Checker
55 for sale near you
Build & PriceAd
Chevrolet.com

The Chevrolet Bolt wasn't the first electric car, but it was one of the first to offer a long range at a somewhat affordable price. Four years on from that 2017 debut, the 2021 Bolt still fits that description with an EPA-estimated 259 miles of range. This amount isn't quite as novel as it once was — most EVs in 2021 can go at least 200 miles — but it's a healthy number for a compact hatchback.

There are minimal changes to the Bolt for 2021. Chevy had planned to give a major update this year but was delayed by the pandemic. You'll see more substantial changes for the 2022 model year. That means that you're more likely to get a better deal on the 2021 model, but you won't have the latest body style for very long.

Overall, we like the Bolt and find it to be an agreeable commuter car. But it does have some drawbacks that might make you want to shop the Hyundai Kona EV, Kia Niro EV, Tesla Model 3 and Volkswagen ID.4 instead. Check out the categories of our Expert Rating below to learn more.

Edmunds' editorial team acquired and lived with a 2017 Chevrolet Bolt for about three years, logging about 34,000 miles. Overall, we found it to be a great commuter car. To learn more about our test, check out our long-term Chevy Bolt test. The 2021 Chevrolet Bolt differs from our 2017 Bolt by way of improved front and rear cameras and a newer battery pack that adds more range. It's the same generation, though, so most of our observations still apply.

Which Bolt EV does Edmunds recommend?

Much of the Bolt's appeal lies in its value. As such, we recommend the base LT trim. There's a big price jump to get the Premier. The Bolt no longer qualifies for any federal tax credits either, which also makes the Premier less enticing. Many of the advanced safety and convenience features from the Premier trim (such as the DC fast-charging capability) can be added to the LT trim as options.

The Bolt comes in two trims: the LT and the Premier. Both models are equipped with the same 66-kWh battery pack under the floor, sending power to a single electric motor (200 horsepower, 266 lb-ft) that drives the front wheels. The estimated range is the same on both trims: 259 miles.

Main options for the LT include:

Premier
Comes with all of the above plus:

Optional for both trims is the Driver Confidence II package that adds:

Top Picks for Special Finance Rates and Cash Offers for April 2021
Save as much as $12,500 with Edmunds 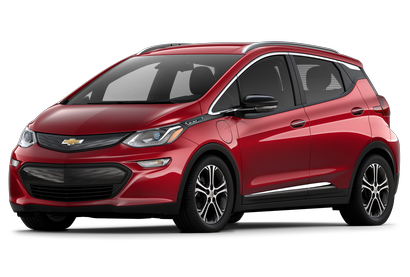 See all for sale

5/5 stars, It is a Bolt in the Arm!
1st a Colt, 2s Volts & Bolt, 02/06/2021
Premier 4dr Hatchback (electric DD)
Having leased and liked a Gen 1 and Gen 2 Volts, I traded one in because of the incredible incentives and value on the 2020s but got a sweet deal on a fresh from the factory 2021s. The Bolt Premier has exceeded my epectations and make the 2019 Volt seem like 1980s! The Bolt handles better, feels more planted, it's Michelin tires have so much better grip than the Michelin OEMs on the Volt. The Volt is quick but the Bolt is a rocket ship. It is wolf in sheep's clothing! Apparently they improved the seats and dash for '21 and the seats are an improvement over the Volt but still are not like my Buick's! The car is exceptionally well made no visual flaws. The AC works well. The safety systems and infotainment systems are so extensive I've watched tutorials. Visibility is great because of the rare greenhouse styling. You sit up higher like in a SUV which is also better than the Volt. I wish the seats had lumbar support and that there was an adaptive cruise control option. My guess is that they will rectify that with the "22s. Why a $43K car doesn't have HomeLink either is a question. The salesperson and finance director were unusally knowledgble. It was my best experience out of 35 cars I've owned! The salesperson told me to drive it in L gear (actually there are not any gears) and the engine acts as a brake when you let your foot off the pedal. Apparently this is what Telsa owners do. Anyway it works great in stop and go traffic and urban driving. I am getting a charger installed in my garage as this Bolt charges about the same as the Volt, 50 miles at night. I need more than that. The interior feels spacious and if you stand next to a Volt it is actually bigger than it looks. There's more interior space than a Telsa S! It's well planted because of its width.
5/5 stars, Who knew it would be so good?
Zaaustin, 03/23/2021
Premier 4dr Hatchback (electric DD)
Went, somewhat reluctantly, for a test drive to help get this particular EV “out of my system”. The pictures had made it look small and so, at 6’3” I had not expected much. Boy was I wrong. This feels spacious inside and it drives like a rocket! All electric sweet! With the current sales prior to the 2022 release year models, this was way more affordable too.
See all 2 reviews
Write a review

Until now, the Chevrolet Bolt EV and its 238 miles of range had a lock on the affordable long-range electric vehicle market. But now Hyundai has introduced the Kona Electric, a similarly sized EV that packs 258 miles of range for about the same price. We put them through the wringer to see which one is best.

Forward Collision Alert
Scans the road ahead and warns of potential rear-end collisions in case the driver hasn't already identified the risks.
Automatic Emergency Braking
Works with forward collision warning to help you avoid or reduce the severity of a front-end collision. Works at speeds under 50 mph.
Lane Keep Assist w/Lane Departure Warning
Warns the driver that the car may be drifting from its lane and can apply corrective action to nudge it back into line.

NHTSA Overall Rating 5 out of 5 stars

Chevrolet Bolt EV vs. the competition

The Nissan Leaf in its Plus trim is worth comparing to the Bolt since it has 226 miles of range and costs about the same. The standard Leaf will set you back less than a Bolt, but it only has a range of 150 miles. Edmunds ranks both of these two EVs about midpack for mainstream EVs. Read Edmunds' long-term road test of the Nissan Leaf.

The Tesla Model 3 has a stylish interior and a high-tech infotainment system. It can receive over-the-air updates that Tesla uses to update software or even capability. Another big advantage is Tesla's nationwide network of Supercharger quick-charge stations. The Model 3 has an estimated 263 miles of range in its base model. Read Edmunds' long-term road test of the Tesla Model 3.

The Kona is similar to the Bolt in terms of price, range and acceleration. But the Kona offers a more composed ride than the Bolt, and its interior feels more solidly put together and properly finished. Take note: The Bolt is offered nationwide, but the Kona is only available in select regions. Read Edmunds' long-term road test of the Hyundai Kona Electric.

More about the 2021 Chevrolet Bolt EV

What do people think of the 2021 Chevrolet Bolt EV?

Consumer ratings and reviews are also available for the 2021 Chevrolet Bolt EV and all its trim types. Overall, Edmunds users rate the 2021 Bolt EV 5.0 on a scale of 1 to 5 stars. Edmunds consumer reviews allow users to sift through aggregated consumer reviews to understand what other drivers are saying about any vehicle in our database. Detailed rating breakdowns (including performance, comfort, value, interior, exterior design, build quality, and reliability) are available as well to provide shoppers with a comprehensive understanding of why customers like the 2021 Bolt EV.

Edmunds members save an average of $12,327 by getting upfront special offers. The estimated special offer price in your area is $26,968.

The average savings for the 2021 Chevrolet Bolt EV LT 4dr Hatchback (electric DD) is 31.4% below the MSRP.

Edmunds members save an average of $12,500 by getting upfront special offers. The estimated special offer price in your area is $31,285.

The average savings for the 2021 Chevrolet Bolt EV Premier 4dr Hatchback (electric DD) is 28.5% below the MSRP.

Which 2021 Chevrolet Bolt EVS are available in my area?

Shop Edmunds' car, SUV, and truck listings of over 6 million vehicles to find a cheap new, used, or certified pre-owned (CPO) 2021 Chevrolet Bolt EV for sale near. There are currently 146 new 2021 Bolt EVS listed for sale in your area, with list prices as low as $38,245 and mileage as low as 0 miles. Simply research the type of car you're interested in and then select a car from our massive database to find cheap vehicles for sale near you. Once you have identified a used vehicle you're interested in, check the AutoCheck vehicle history reports, read dealer reviews, and find out what other owners paid for the 2021 Chevrolet Bolt EV. Then select Edmunds special offers, perks, deals, and incentives to contact the dealer of your choice and save up to $14,733 on a used or CPO 2021 Bolt EV available from a dealership near you.

Can't find a new 2021 Chevrolet Bolt EVs you want in your area? Consider a broader search.

Should I lease or buy a 2021 Chevrolet Bolt EV?