Thanks for your interest in Edmunds.com.

We're proud of what we do and are happy to help you understand who we are and how we got to where we are today. Here are some fun facts:

Have a look at this timeline to learn about some Edmunds.com® proudest and most interesting moments:

1966: Edmunds.com Inc. was founded “for the purpose of publishing new and used automotive pricing guides to assist automobile buyers.”

1994:  Before the World Wide Web became mainstream, our new car pricing data was first posted on the Internet through a "gopher site" that was known as "The Electronic Newsstand." This was the first time consumer automotive information had been provided through the Internet.

1996: We launched our Forums (previously known as Town Hall), the most established automotive message boards, where thousands of individuals meet to discuss all things automotive.

1998: Edmunds.com became the first automotive Web site to deliver its content to outer space. Russian cosmonauts aboard the Mir spacecraft asked NASA to send them interesting automotive leisure reading, and NASA looked to us for help. In response, we transferred our Edmunds.com content to a CD-ROM and delivered it to NASA, which in turn delivered it to the spacecraft. USA Today reported this event in its January 12, 1998 edition.

2002: We introduced our unique True Cost to Own® tool, which is the only way to compare what new cars will cost over five years of ownership, and our Consumer Ratings and Reviews, which now contains hundreds of thousands of car ratings and commentaries by our visitors.

2003: We made freely available the most useful and sophisticated set of automotive financial calculators available on the Internet.

2005: We significantly expanded our editorial team and our broadband video capabilities.

2005: We began publishing specific automotive references on popular topics such as safety and fuel economy. Our Car Safety Guide presents articles on recalls, car seats and safety advancements, while our Fuel Economy and Green Cars Guide gives tips on saving gasoline, shopping for a fuel-efficient vehicle and related subjects that help readers understand and minimize the environmental impact of their automotive choices.

2007: We introduced Dealer Ratings and Reviews, where our site visitors can celebrate positive sales and service experiences and warn about negative ones.

2008: Edmunds' Answers launched, making it possible for consumers to post specific automotive questions and get helpful answers from the community of car experts and enthusiasts who frequent our site.

2008: In response to skyrocketing gas prices, we created our Gas-Guzzler Trade-In Calculator, an interactive tool that helps consumers determine the payback period and fuel savings from trading-in a fuel-thirsty vehicle for a more fuel-efficient one.

2008: We launched the Car Audio & Electronics Center, a resource for consumers seeking all the latest information on iPod connectivity, phone integration and mobile electronics.

2009: We began to display actual new car inventory available on new car dealer lots so that shoppers can find out which dealers have the exact vehicle they want to buy.

2009: Another great calculator was launched: this one helps users determine "how much car can I afford?"

2011: We launched a free online guide for first-time new car buyers (Repeat buyers are welcome to check out that useful resource too.)

2011: We opened the EdmundsLive advice line, which connects individual consumers with Edmunds.com employees who can answer their car questions via phone, email or Twitter.

2011: Edmunds.com was named the top non-automaker on the list of the Top 100 Auto Industry Influencers in North America, according to an analysis of Twitter activity conducted by the Automotive Digital Marketing (ADM) Professional Community.

2011: The company initiated and hosted a stimulating and sometimes counter-intuitive discussion of car safety issues at the Edmunds.com Car Safety Conference in Washington, DC, and later returned to the Capitol to testify before a House subcommittee on fuel economy issues.

2011: One of our automotive experts had a prominent role in the popular documentary “Revenge of the Electric Car.”

2011: We launched our direct-to-dealer business model and staffed up accordingly, beginning a hiring boom that would increase our employee base by over 30%.

2012: Edmunds.com was named the top site used by consumers to help them select a car dealer, according to a new study conducted by online and social media agency Digital Air StrikeTM

2012: We launched our Debt-Free Car Project, through which we bought a $3800 vehicle and are living with it so we can report back on something slightly less shiny and new than our usual test drive.

2013: Edmunds.com presented its first Annual Five Star Premier Dealer Awards to 95 dealerships that have earned an average customer review rating of five stars on Edmunds.com — with a minimum of 20 reviews during the previous two years.

2013: We hosted our first annual Hackomotive event and awarded $28,000 to teams that generated and presented the best concepts for making car shopping easier.

2013: We began to engage in week-long dealership "job swaps" to help our employees experience the car shopping process firsthand.

2013: Edmunds.com was named one of the most trusted prominent online review sites, according to Maritz Research’s 2013 Online Customer Review Study. Edmunds was the only automotive site listed in the top 10 and it ranked 4th overall, outperforming Yelp, Google+, Hotels.com, City Search and others.

2014: We added leasing to our Price Promise offer.

2014: At the conclusion of our second annual Hackomotive event, we awarded $35,000 to innovative teams who are on the path to create a significantly better car shopping experience. Later in the year, we acquired first place winner CarcodeSMS and began freely offering its capability with car shoppers and dealers around the country: one-to-one direct texting, accessible to car shoppers from dealer's websites.

2014: We updated our award-winning app to include Lot Buddy, a location-aware feature that enables car shoppers to instantly unlock Price Promise® no-haggle offers when they step onto a dealer's lot.

2015: Our winning company culture showed through during two inaugural events: Take Your Parents to Work Day and Summer Camp.

2015: Thanks to our launch of Edmunds Express, dealers can now input Vehicle Identification Numbers to quickly validate pricing, specs and other vehicle attributes for customers in a streamlined Edmunds.com environment without having to navigate through our site. 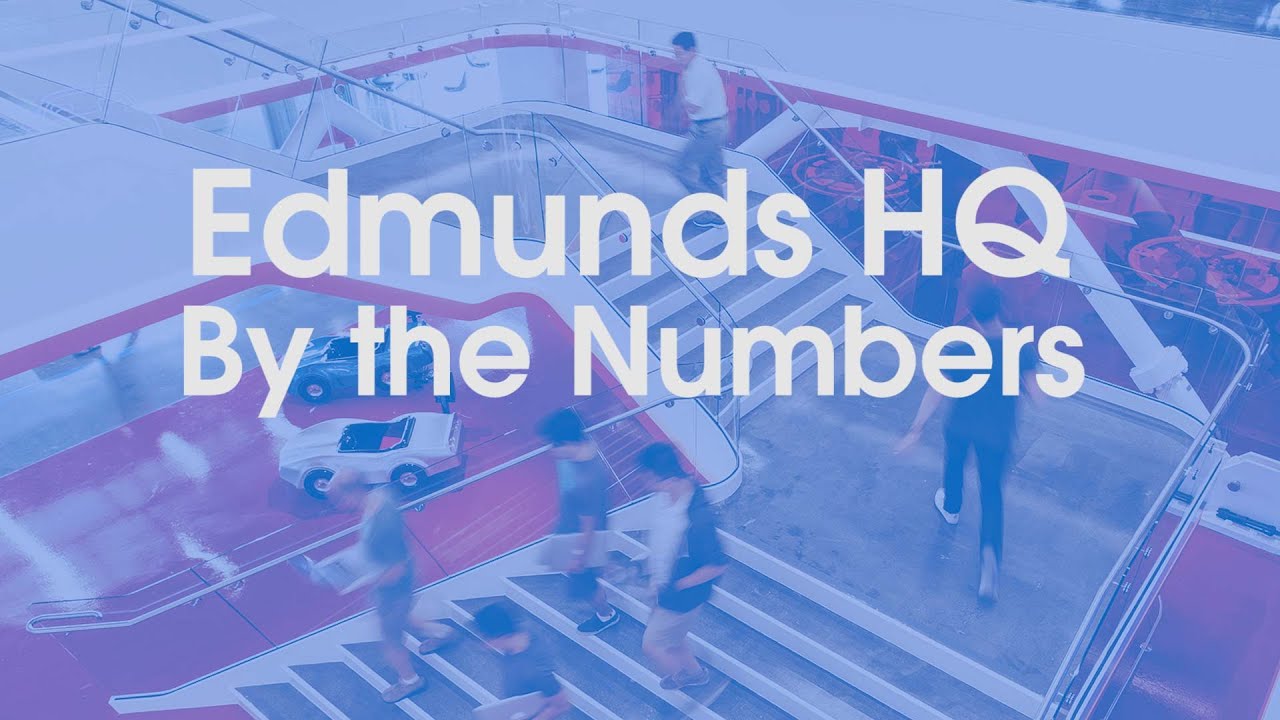 Edmunds HQ | By the Numbers