3 Offers Near 20147
Check out current offers on the Subaru Ascent™
VIEW OFFERS
Subaru.com 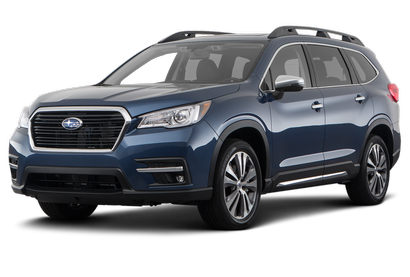 The 2021 Subaru Ascent is a decent choice in the midsize three-row SUV class, but it's far from being a top contender, currently sitting in seventh place in Edmunds' rankings. For 2021, the Ascent gets a full suite of standard safety features including adaptive cruise control, along with lane keeping assist and steering-responsive LED headlights. But even with those additions, it still falls behind the top-rated Kia Telluride, Hyundai Palisade and Honda Pilot in a number of areas. We give credit to the Ascent's long list of standard features, refined interior and easy-to-use infotainment system. Yet the positives are tempered by an oversensitive gas pedal, noticeable in-cabin noise, a somewhat restrictive third-row seat and slightly stiff ride quality.

Which Ascent does Edmunds recommend?

We recommend the Premium trim level, just one notch up from the base Ascent. The Premium balances affordability with feature availability. It comes standard with the larger 8-inch touchscreen and blind-spot monitoring with rear cross-traffic alert, and it offers options such as navigation and a panoramic sunroof.

The 2021 Subaru Ascent is available in base, Premium, Limited and Touring trim levels. All use a turbocharged 2.4-liter four-cylinder engine (260 horsepower, 277 lb-ft of torque) paired with a CVT automatic. All-wheel drive comes standard across the lineup.

Base
Equipment for the base Ascent includes:

Buyers interested in the base trim level should know that it's only available in an eight-passenger configuration and the tow rating is limited to 2,000 pounds.

Premium
With the Premium, the tow rating is increased to 5,000 pounds. You also get:

Options for the Premium include:

Limited
The Limited trim comes with most of the Premium's optional features as standard. Other standard equipment for the Limited includes:

Touring
The Touring trim simplifies things even further, sold only in the seven-passenger seating configuration and coming standard with all of the previously optional equipment. Also standard are some creature comforts such as: