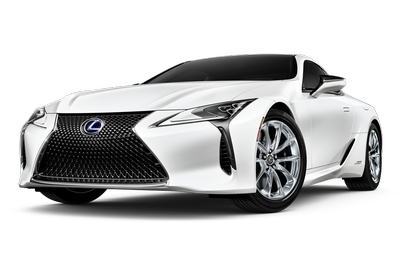 The 2020 Lexus LC 500h, as the "h" suggests, is simply a hybrid-equipped version of the LC 500, a boldly designed luxury coupe. Instead of having a V8 engine like the regular LC does, however, the LC 500h uses a 3.5-liter V6 engine combined with two motor-generators. The resulting 354 horsepower won't blow you away, but the 500h is still sufficiently quick. Plus, it gets around 30 mpg, which is excellent for a big luxury coupe.

Just like the regular LC, the LC 500h has a luxurious and futuristic interior that's appointed in high-quality leather and simulated suede. Combine this with an adjustable suspension that strikes an impressive balance between a sporty and comfortable ride and you've got a luxury car that neatly fits the traditional role of the grand touring coupe.

For 2020, the LC 500h sees only minor changes. Alas, that means it's still stuck with the same infotainment system, which has a touchpad interface that can be frustrating to use while driving. There's also the issue of the rear seat; despite having one, the LC is really a two-person car. Overall, though, the Lexus LC 500h is an impressive and compelling package that belongs in the company of other world-class grand-touring cars, with the added benefit of hybrid fuel efficiency.

7.4 / 10
The LC 500h is a gorgeous car with an innovative hybrid V6 engine, a smooth ride, and a quiet, luxurious interior highlighted by advanced, even avant-garde design. It won't click with everyone, but it's tremendous fun to drive, especially on a straight open road.

How does it drive?

6.5
Aside from increased fuel economy, the LC 500h's powertrain is less appealing in every way than the more affordable gas-only LC coupe with its V8 engine. The 500h's combination of V6 and dual electric motors doesn't lack power necessarily; it's just 0.1 second slower going 0-60 mph than the V8. But the system does add 150 pounds to a car that's already heavy, and it lacks the V8's wonderful sound and sonic delight.

Inconsistent brake feel and a complicated transmission system sap some of this car's driving spirit, but superb weight balance and grippy tires mean twisty roads aren't out of the question. Solid steering feel at highway speeds also makes for easy and stable cruising.

How comfortable is it?

8.0
Even though the LC's optional sport seats sound like an upgrade (more sport means more fun, right?), we preferred the standard seats. They have less bolstering than the sport seats, but the LC isn't made for fast turns and carving, so it's not a problem. The regular seats cradle average adult frames quite well, although larger, wider bodies might be less enthusiastic.

The 500h's adjustable suspension excels at absorbing large bumps and smaller road imperfections, even with our test car's big 20-inch wheels. There's some noticeable wind noise at freeway speeds and, depending on the road surface, some tire noise, too. But around town or on well-kept roads, the LC 500h is pleasantly quiet.

7.5
While everything's easy to reach, many controls are frustrating to use. Locating options in the infotainment system with its awkward haptic touchpad interface is one problem. The steering wheel controls take a bit of getting used to because not all are intuitively placed or labeled.

Getting in and out is easier than you'd expect of a car seated this low, and the driving position feels snug and commanding. But the cabin is surprisingly small relative to the LC 500h's size, and the bulky transmission tunnel and angled-in windows mean you have little room to move around. The rear seat is useless for adults or even taller children.

7.0
While everything's easy to reach, many controls are frustrating to use. Locating options in the infotainment system with its awkward haptic touchpad interface is one problem. The steering wheel controls take a bit of getting used to because not all are intuitively placed or labeled.

Getting in and out is easier than you'd expect of a car seated this low, and the driving position feels snug and commanding. But the cabin is surprisingly small relative to the LC 500h's size, and the bulky transmission tunnel and angled-in windows mean you have little room to move around. The rear seat is useless for adults or even taller children.

6.0
The LC 500 has very little usable space given its size. There's a woeful lack of small-item storage and no good spot to store your phone for easy access.

The 4.7-cubic-foot trunk is larger than a Porsche 911's, but the competitive edge ends there. It's still quite small and shallow, with a high liftover height. The car's battery also consumes trunk space and contributes quite a bit of ambient heat even after short drives. The back seat is actually the most useful storage space in the vehicle.

How economical is it?

8.0
An EPA-estimated 30 mpg in combined city/highway driving is a phenomenal figure for this class of vehicle. We managed 25.8 mpg over two weeks of mixed driving, covering open highways and being stuck in rush-hour traffic. Our best tank was 28.7 mpg. Given these results, it's possible that the EPA numbers are slightly optimistic

Is it a good value?

8.0
Yes, it's expensive, but the LC 500h offers a lot of car for the money. High-quality materials abound, and the overall fit and finish is exceptional. The LC offers a longer powertrain warranty than many rivals, and given the company's track record, you're unlikely to find a sporty grand-touring hybrid that will cost less in the long run.

8.5
Lexus was the first brand in the modern era to champion the performance benefits of hybrids. The LC 500h advances that message, even if it can't match the performance of other sports cars in this price range. Instead, it leads with all-around excellence. The LC oozes exceptional quality, daring interior and exterior design, and world-class luxury.

There's just enough power and handling performance to keep it interesting, even if the 500h is more at home on long highway travels than twisting roads. For maximum fun, the V8 version is the one to get. But whether V8 or hybrid, the LC is a halo car that showcases Lexus' core values.

Which LC 500h does Edmunds recommend?

There's only one LC 500 trim level available, but a few choice packages can tailor the coupe to your specific needs. We like the Sport package for its 20-inch wheels and limited-slip differential, although we have reservations about the included sport seats. Best to keep it simple with the Touring package, which adds upgraded leather and the exquisite Mark Levinson surround-sound system.

The 2020 Lexus LC 500h is a luxury hybrid sport coupe that seats four and is available in a single trim. The V8-powered LC 500 is reviewed separately.

The heart of the LC 500h is a 3.5-liter V6 assisted by a pair of electric motor-generators. In total, the setup produces 354 horsepower. Two transmissions — a continuously variable automatic and a four-speed conventional automatic — work in conjunction to drive the rear wheels. The transmissions simulate a total of 10 gears, which can be manually selected using steering-wheel-mounted shift paddles.

A handful of packages allow you to tailor the LC to your taste even further, highlighted by features including a carbon-fiber roof, a limited-slip rear differential, 20- and 21-inch wheels, a head-up display, and a premium 13-speaker Mark Levinson audio system. Drivers seeking maximum performance can also get variable ratio steering, active rear steering and a speed-activated rear wing.

Be the first to write a review

All-Speed Dynamic Radar Cruise Control
Adjusts vehicle speed to maintain a set distance between the LC 500h and the car in front while using cruise control.
Pre-Collision System
Alerts the driver if a front collision with a pedestrian or vehicle is deemed imminent. Can automatically apply the brakes.
Intuitive Park Assist
Sounds an alert that increases in frequency as the LC 500h approaches an object in front of or behind the car.

Lexus LC 500h vs. the competition

You'd think it would be difficult to find a more futuristic and striking vehicle than the LC 500h, but the BMW i8 could be it. Just as technologically compelling, the i8 puts a little bit more of a performance bend on the luxury hybrid coupe concept. But when compared to the Lexus, the BMW is considerably less luxurious and practical, not to mention substantially more expensive.

What the GT-R lacks in striking styling it more than makes up for with outstanding performance. Still one of the quickest cars over any road, the GT-R remains a technological marvel. But even after improvements over the years, this Nissan requires commitment to operate on a daily basis. It's not nearly as luxurious as the Lexus either.

If the shape of Lexus' new coupe has caught your eye but you'd like the performance to back it up, the V8-powered LC 500 (no lowercase "h" here) should satiate your needs. Powered by a sonorous 5.0-liter V8, the car goes as good as it looks. Equipment is the same across the two cars, so the pros and cons of each are the same, with the exception of fuel economy of course.

Consumer ratings and reviews are also available for the 2020 Lexus LC 500h and all its trim types. Edmunds consumer reviews allow users to sift through aggregated consumer reviews to understand what other drivers are saying about any vehicle in our database. Detailed rating breakdowns (including performance, comfort, value, interior, exterior design, build quality, and reliability) are available as well to provide shoppers with a comprehensive understanding of why customers like the 2020 LC 500h.

Shop Edmunds' car, SUV, and truck listings of over 6 million vehicles to find a cheap new, used, or certified pre-owned (CPO) 2020 Lexus LC 500h for sale near. Simply research the type of car you're interested in and then select a car from our massive database to find cheap vehicles for sale near you. Once you have identified a used vehicle you're interested in, check the AutoCheck vehicle history reports, read dealer reviews, and find out what other owners paid for the 2020 Lexus LC 500h.