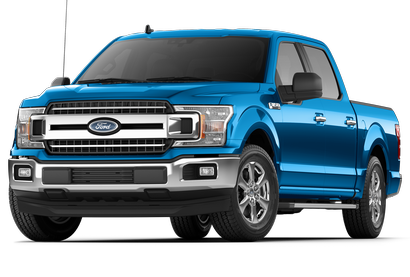 The Ford F-150 is a full-size light-duty pickup truck, and it has dominated new vehicle sales in the United States for decades. Part of its widespread appeal is its seemingly endless range of configurations. Whether you're looking for a basic work truck, fully loaded luxury cruiser or go-anywhere off-roader, there's a version of the F-150 to meet your needs and budget.

For 2021, Ford has redesigned the F-150. There's no revolutionary shift in construction this time around like back in 2015 when Ford employed aluminum body panels. Instead, Ford has focused on enhancing the truck's capability in other ways. Examples include a new hybrid powertrain, a robust onboard generator, and an updated interior with a new infotainment system.

Chevrolet, GMC and Ram have all overhauled their pickups over the last couple years, offering further refinements and trick new features that were previously absent on the Ford. This latest F-150 levels the playing field and is a must-see for light-duty truck shoppers.

The big news for the 2021 F-150 is the new PowerBoost V6 hybrid powertrain. Essentially, it consists of the optional turbocharged 3.5-liter V6 paired to a lithium-ion battery pack, a 47-horsepower electric motor and a 10-speed automatic transmission. Altogether, the engine and battery pack combine to make 430 horsepower and 570 lb-ft of torque — numbers that are only fully surpassed by the Ram 1500 TRX with its supercharged 702-hp V8 engine.

While the Ram 1500 currently uses a 48-volt mild hybrid system in some of its engines, the F-150 is the first truck in its class with a full hybrid system. What's the difference? The Ram's system replaces the traditional alternator to bring about a variety of small improvements, including those to fuel economy and drivability. Ford's setup is a full hybrid system but one that's specifically designed for truck use. It adds power and can recoup energy through regenerative braking.

The base engine remains a 3.3-liter V6, but, as with all other F-150 motors, it's now paired exclusively to a 10-speed automatic transmission. Optional engines include a turbocharged 2.7-liter V6, a 5.0-liter V8, a 3.0-liter turbodiesel V6 and a non-hybrid version of the turbocharged 3.5-liter V6. There's no word yet on whether the high-output 3.5-liter V6 will return — it was previously paired exclusively with the F-150 Raptor — but we're optimistic.

My first-drive experience was mostly with the hybrid PowerBoost truck. Because of the added weight from the hybrid system (about 560 pounds), the truck feels a bit more substantial. But even with added mass, the F-150 is still easy to drive. The steering is well weighted and body roll is minimal through hard cornering. Power delivery is smooth on long grades and impressive when you mash the throttle. But at low speeds, the transition from electric to gasoline power could be smoother; I certainly noticed the handoff. Otherwise, this truck is a breeze to drive on the highway, in the city, or out on trails.

With the redesign of the 2021 F-150, Ford has added new comfort and convenience features that will be a big benefit to most truck owners. New interior materials give the truck a classier look from a distance and a better feel once you're inside. A new optional front seat design allows you to recline the seat almost all the way flat, making those roadside rest-stop naps much more comfortable.

The suspension design hasn't changed much on this new F-150, so it still can't quite match the ultra-smooth ride quality of the Ram 1500 with its coil-spring suspension. But it's pretty close. On the highway, the F-150 is quiet over broken surfaces, with a smooth ride over most small bumps. Only large imperfections make much change in cabin comfort.

Ford has redesigned the F-150's interior, but it is more of an evolution of the previous-generation's design than it is a complete overhaul. Interior surfaces and materials have notably improved, and on higher-end trims, the look and feel are much more luxurious. Current Ford owners will be familiar with the knobs, buttons and often-used controls, which are all logically located.

There are plenty of places to stow small items and even an available locking compartment under the rear seat for stowing away larger items. There's also an available stowable shifter that folds into the center console to free up space while you're parked. What do you do with that space? Check out the optional flip-out center console; it creates a flat tray-like surface big enough to set a laptop on. Or, heck, maybe even a platter of nachos. Really, let your creativity run wild with this one.

The previous base 4.2-inch central display is gone. Now even base F-150s come with an 8-inch touchscreen loaded with the newest version of Ford's infotainment system, dubbed Sync 4. Upper trims receive a new horizontally oriented 12-inch touchscreen with split-screen functionality. It gives you the flexibility to display two systems at once — viewing maps and controlling the music selection, for instance. You can also use it to access the F-150's digital owner's manual, which includes built-in how-to videos on using the truck's many features.

The new Sync 4 system allows for wireless connectivity of Apple CarPlay and Android Auto — that means you don't need a USB cord to integrate your phone with the system. Ford has integrated over-the-air updates for the new F-150 too, which opens the door for feature upgrades without visiting a dealer, as well as predictive maintenance alerts. The biggest of those over-the-air updates, however, relates to Ford's new Active Drive Assist system.

Advanced driving aids such as adaptive cruise control and blind-spot monitoring with trailer coverage continue to be offered, but Ford's Co-Pilot360 suite offers a few new items for 2021. The most intriguing is Active Drive Assist, which promises hands-free driving on a number of divided highways throughout the United States and Canada. Unfortunately, the software that controls hands-free driving won't be ready at launch. To get it, you'll have to buy the hardware via the Active Drive Assist prep kit, then pay an additional fee to get the software when it launches in late 2021. There are quite a few hoops to jump through, but the system could prove invaluable to those making frequent long-distance trips.

Also new for the 2021 F-150 is the Pro Power Onboard system. This is essentially an onboard electric generator that allows you to power tools and appliances whether you're stationary or driving. Paired to one of the F-150's regular gasoline engines, the system provides 2 kilowatts of output. Opt for the truck's hybrid powertrain and the system is capable of either 2.4 kW or 7.2 kW.

You can tap into the power via an outlet cluster in the bed, which comes with two 120-volt 20-amp outlets. On the upgraded 7.2-kW hybrid system, you get two additional 120-volt outlets plus a 240-volt 30-amp outlet.

What can you do with this power? For a contractor, it might mean powering electrical saws and an air compressor. Tailgating instead? You might load up a TV, a sound system and floodlights. Overlanding nature explorers could even use it to power a mobile refrigerator.

In terms of the payload capacity, the F-150 now tops out at an incredible 3,325 pounds — that's nearly 1,000 pounds more than the nearest competitor, the Silverado, which checks in at 2,250 pounds.

The F-150 also gets some additional functionality in the bed thanks to new tailgate-mounted cleats and the available Tailgate Work Surface feature. This option adds rulers, a cupholder and phone holder to create a surface that offers even more utility with the tailgate folded. The tailgate now offers power open and close functionality, too.

At the top of the F-150's lineup is the 3.5-liter PowerBoost setup and it produces impressive fuel economy ratings for a light-duty full-size pickup truck. The EPA estimates it will get 24 mpg combined (24 city/24 highway). That outperforms every other gasoline-powered pickup truck in the segment.

Diesel-powered models from Chevy and Ram have it beat by a few miles per gallon. Otherwise, the F-150's fuel economy estimates are respectable when you consider its capability, ranging from 19 mpg combined with the 5.0-liter V8 all the way up to 22 mpg combined with the 2.7-liter V6. Fuel economy ratings for the 2021 F-150 with its 3.0-liter diesel have not been released at the time of this writing.

The F-150 was already one of the best pickup trucks on the market, and its significant list of additions and improvements for 2021 should cement its position near the top for years to come. With all the new features, high-end tech advancements and the optional hybrid powertrain, it's hard to beat.

Sponsored cars related to the F-150

Be the first to write a review

Consumer ratings and reviews are also available for the 2021 Ford F-150 SuperCab and all its trim types. Edmunds consumer reviews allow users to sift through aggregated consumer reviews to understand what other drivers are saying about any vehicle in our database. Detailed rating breakdowns (including performance, comfort, value, interior, exterior design, build quality, and reliability) are available as well to provide shoppers with a comprehensive understanding of why customers like the 2021 F-150 SuperCab.

Edmunds members save an average of -$401 by getting upfront special offers. The estimated special offer price in your area is $45,471.

There are currently 12 new 2021 [object Object] F-150 SuperCabs listed for sale in your area, with list prices as low as $37,280 and mileage as low as 0 miles. Simply research the type of used car you're interested in and then select a car from our massive database to find cheap used cars for sale near you. Once you have identified a vehicle you're interested in, check the AutoCheck vehicle history reports, read dealer reviews, and find out what other owners paid for the 2021 Ford F-150 SuperCab. Then select Edmunds special offers, perks, deals, and incentives to contact the dealer of your choice and save up to $3,981 on a new, used or CPO 2021 [object Object] F-150 SuperCab available from a dealership near you.

Shop Edmunds' car, SUV, and truck listings of over 6 million vehicles to find a cheap new, used, or certified pre-owned (CPO) 2021 [object Object] F-150 SuperCab for sale near you.