Find Deals Near 20147
Check out current offers on the Ram 2500
See Discounts
Ramtrucks.com

byRyan ZumMallen
Reviews Editor
Ryan ZumMallen has worked in the automotive industry since 2012. He has written thousands of car-related articles and tested and reviewed hundreds of vehicles over the course of his career.
Pros
Cons
What's new

The world of heavy-duty trucks is one of serious work and toughness — these massive pickups need to withstand the rigors of a work site over years of use. Typically, comfort and technology do not fit into the equation. The Ram 2500, however, is the exception to this rule. Since its debut in 2019, the latest version of the Ram 2500 has set new benchmarks for the class when it comes to ride smoothness, interior luxury and touchscreen size. Advanced driver assistance aids are on hand to improve safety on the road.

The Ram 2500 is our top-rated choice for heavy-duty trucks based on its unique coil-spring suspension and powerful engine lineup. Since it's relatively new on the scene, there are few changes to the pickup for the 2021 model year. That's a good thing. The Ram 2500 provides an upscale interior that competitors are trying to catch up with, and its maximum towing and payload capacities are formidable across its many trims and configurations. This is a truck whose primary purpose is work, but it doesn't require you to suffer as a result. Read on for our full breakdown of the 2021 Ram 2500.

Which 2500 does Edmunds recommend?

One step up from the base model, the Big Horn (called the Lone Star for Texas buyers) provides impressive towing and hauling capabilities along with a strong set of standard features. It's a more comfortable Ram 2500 for everyday use than the no-frills Tradesman. If you're looking for a boost in capability, consider the Towing Technology Group package for upgraded mirrors, exterior lights and safety sensors.

Save as much as $904 with Edmunds
Pick a trim

in Ashburn, VA
Based on most popular styles with no options
Compare dealer prices
Average price paid: $47,925This chart shows prices based on Lone Star 4dr Mega Cab 4WD SB (6.4L 8cyl 8A) sales in your area up through January 10th, including destination fee, and any rebates currently available near Ashburn, VA 20147
based on most popular style with no options
Bring back a dealer's quote, and we'll tell you if it's a good price.
$
I don’t have a VIN# 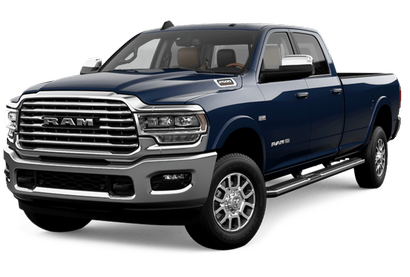 The Ram 2500 is available in seven distinct trim levels: Tradesman, Big Horn, Lone Star, Laramie, Limited Longhorn, Limited and the off-road-specific Power Wagon. The standard engine is a 6.4-liter V8 (410 horsepower, 429 lb-ft of torque), and a 6.7-liter turbodiesel V8 (370 hp, 850 lb-ft) is optional on all trims except the Power Wagon. Four-wheel drive is optional on all trims except for the Power Wagon, which gets 4WD standard.

Tradesman
The base model offers a utilitarian interior and these standard features:

Available on all trims is the optional Safety Group package, which comes with:

Big Horn/Lone Star
For a step up in comfort, it comes with the following:

Laramie
The Laramie requires a jump in price but takes the heavy-duty truck experience to another level:

Longhorn
A premium trim with luxury features such as:

Limited
A top-of-the-line heavy-duty truck thanks to this equipment:

You've watched the comparison video, but with this one we need to answer a simple question: Which is quicker off-road, the Ram Power Wagon or the Ford F-250 Tremor? In this video, Travis Langness and Ryan ZumMallen find out and demonstrate in the process just how much power the Ford Super Duty's turbodiesel has on hand.
2020 Ford Tremor vs. Ram Power Wagon Off-Road Drag Race! Who...
Ram Power Wagon vs. Ram F-250 Tremor Off-Road Battle! Review...

Forward Collision Alert
Warns the driver of an imminent front-end collision and can apply the brakes to bring the vehicle to a stop.
Lane Keeping Assist
Keeps the truck in its lane on the highway by scanning the road markings and applying a mild correction to the steering.
Surround-View Camera
Gives a simulated 360-degree bird's-eye view of the vehicle to help it fit into tight spaces.

The Ford F-250 Super Duty is available in even more sizes and configurations than the Ram. You can choose from two gasoline V8 engines or a turbodiesel V8 with 1,050 lb-ft of torque. It also uses a lightweight aluminum body that improves towing and payload capacities. The F-250 is nice to drive but not as comfortable as the Ram.

Chevrolet's entry in the heavy-duty truck segment is strong and capable, but it doesn't leave an impression as the Ford and Ram do. There are five trim levels, a standard V8 engine, and an optional turbodiesel with abundant power. For something a little more upscale, the GMC Sierra 2500HD is similar to the Silverado with more premium features.

If you're unsure whether you need all the capability of a heavy-duty truck, consider the Ram 1500. It's our pick for the most comfortable full-size pickup available, with more affordable pricing than the larger 2500. What's more, light-duty trucks including the Ram 1500 have impressive maximum tow ratings that can exceed 12,000 pounds.

Consumer ratings and reviews are also available for the 2021 Ram 2500 Mega Cab and all its trim types. Overall, Edmunds users rate the 2021 2500 Mega Cab 4.0 on a scale of 1 to 5 stars. Edmunds consumer reviews allow users to sift through aggregated consumer reviews to understand what other drivers are saying about any vehicle in our database. Detailed rating breakdowns (including performance, comfort, value, interior, exterior design, build quality, and reliability) are available as well to provide shoppers with a comprehensive understanding of why customers like the 2021 2500 Mega Cab.

Edmunds members save an average of $888 by getting upfront special offers. The estimated special offer price in your area is $47,682.

Edmunds members save an average of $904 by getting upfront special offers. The estimated special offer price in your area is $47,666.

Edmunds members save an average of $219 by getting upfront special offers. The estimated special offer price in your area is $55,511.

Edmunds members save an average of $604 by getting upfront special offers. The estimated special offer price in your area is $62,571.

Edmunds members save an average of $559 by getting upfront special offers. The estimated special offer price in your area is $67,471.

Simply research the type of used car you're interested in and then select a car from our massive database to find cheap used cars for sale near you. Once you have identified a vehicle you're interested in, check the AutoCheck vehicle history reports, read dealer reviews, and find out what other owners paid for the 2021 Ram 2500 Mega Cab.

Shop Edmunds' car, SUV, and truck listings of over 6 million vehicles to find a cheap new, used, or certified pre-owned (CPO) 2021 Ram 2500 Mega Cab for sale near you.

Find a new Ram for sale.

Shopping for car insurance?
Make sure you’re getting the best rate. Check Rates