The self-proclaimed "king of the full-size sport-utility segment" was completely redesigned last year, yet 2001 still sees improvements to the powertrain. Chevy has upped the horsepower rating of the Vortec 6000 to 320, and 360 foot-pounds of torque is now made at 4,000 revs. A new 8.1-liter engine cranks out 340-horsepower at 4,200 rpm and 455 foot-pounds of torque at 3,200 rpm. You can maintain a relationship with your mechanic on a less intimate level, thanks to an increase in the recommended oil change interval from 7,500 miles to 10,000 miles.

The Excursion may be bigger, but that doesn't mean it's better. Unless you absolutely need the extra space, the Suburban is still our choice for the best all-around full-size sport-utility.

In the war of the SUVs, Ford took the lead for largest competitor. But in war, bigger is not always better -- just ask Goliath. While the 2001 Chevrolet Suburban may have David aspirations in this vehicular tete-a-tete, being small isn't part of its character. More importantly, the Suburban was completely redesigned last year, and the engineers took that opportunity to capitalize on their long history of truck building by changing as much as they could.

All Excursions aside, this vehicle is big. Coming in at a length of 18.3 feet, the heavy-duty 2500 weighs in at an impressive 5760 pounds -- almost 3 tons of truck. Towering above 6 feet for the four-wheel-drive models, is no less imposing than Ford's monster, which is 7 inches taller. However, 7 inches can make a difference -- a Suburban will fit in a standard garage or a car wash rack.

The 2001 Suburban comes in two models, the 1500 and the 2500, both offering two- and four-wheel-drive configurations. The 1500s come with a 285-horsepower, 5.3-liter V8 engine, while the 2500 is equipped with either a 320-horsepower, 6.0-liter V8 or a new 8.1-liter eight-cylinder that brews up 340 horses. All come from the Vortec family of small-block engines and have more horsepower than previous Suburban engines. Fronting a four-speed automatic transmission, the Suburban proves to be a great workhorse.

Ride and handling have been vastly improved from the previous Suburbans, with increased body strength and stiffness. The 1500s are equipped with a five-link coil-spring rear suspension, allowing the truck to track better on gravel or washboard roads and giving you more wheel control. The suspension on the 2500s comes with the same rear leaf springs as their Silverado stablemates, giving them heavy-duty towing capacities to go with the strong V8s.

The interior is comfortable and convenient. Efficient placement of air ducts and a spare tire located underneath the cargo floor rather than inside the cabin allow for copious amounts of useable space and better movement throughout than comparable vehicles. Well-designed seatback angles, a driver's seat with more positioning options than some near-luxury cars provide and second-row captain's chairs go a long way in providing you and your passengers with a pleasant environment.

This Suburban has a lot to offer. It's not the most stylish, nor the biggest SUV on the market, but a lot of time and effort on the part of designers have paid off. 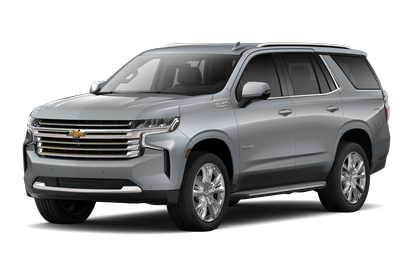 5 out of 5 stars
Best automobile I ever had......................
Danielle White,09/10/2015
2001 Chevrolet Suburban 2500 4WD 4dr SUV (6.0L 8cyl 4A)
Know that if you buy this vehicle you will have a reliable vehicle for life. I purchased my Suburban in 2001 with 22K miles on it and have driven this vehicle for 13 years as far as Nova Scotia Canada as well as many, many other states but this vehicle has taken me many miles and I have not had any problems with it. The tires are a little pricey but what can you expect for such a mega … vehicle. The seats are comfortable, seating is awesome and which is why I purchased. I was infatuated with having a vehicle that seated 9 although at the time I only had 1 child. The vehicle has so much space. We would travel and be able to leave all the seats in and take our child bike as well as luggage. When we all wanted to take bikes we would take out the 3rd row and the bikes would sit up in there without taking any wheels off as well as luggage and cooler. I can't say anything bad about the Suburban. I cried when I sold mine. So 13years later and 289,000 miles!!!!! I sold my vehicle because I did notice around 270,000 miles the engine requires work. Watch out for the coils, its like 8 of them and they cost a whopping chunk of change. I could not get the check engine light to go off once I hit 270K miles no matter what I did to repair the vehicle. I still have no complaints because for the whole life of the truck I never fixed anything on the truck except replacing the fuel pump $600 so this baby has been good to me. Also please note as the truck gets older the gas mileage gets better. I drove from Raleigh NC to Orlando FL round trip for $228. Awesome!!!Once I had the engine problems I spent about $1200 on the car and still couldn't get the truck to drive as it once did and I lost my job and was unable to continue to work on the truck so I sold it for $3000 which I am more than satisfied with. I cried and kissed my baby on the day of sale. I wish I could have kept it forever and I would have changed out the motor and kept it moving....Please keep in mind, I am a woman driver and drove my baby like she was built but at the same time I took great care of her so I know that had something to do with how good of shape she was still in and how she was able to be reliable for me. I am in the market for buying another one..... It's 09/10/2016 and I still have not found one. I found a BMW 325ci convertible, sweet yes but nothing like my suburban. I am still in the market for buying another Suburban (it's 3/12/17), they are so costly and the miles are too high. I know I will NEVER find another one like mine, I gave birth to mine and watched it grow and leave the nest....:(
4.88 out of 5 stars
Nothing but praise!
JB,03/29/2010
2001 Chevrolet Suburban 1500 4WD 4dr SUV (5.3L 8cyl 4A)
Purchased vehicle new for hauling the family and a utility trailer. After 217,000 miles of use that has expanded to include long road trips loaded to the max, towing an enclosed snowmobile trailer in Maine, many off road excursions in Maine and Colorado, and now towing a 23' travel trailer in the Rockies this truck has performed flawlessly. Besides general maintenance I have replaced a … water pump, fuel pump, alternator, and rotors, once. The engine has never been opened except to replace an intake gasket. It is just now starting to burn some oil when pressed hard. Every single function on this vehicle still works. The transmission and brake issues have been resolved. This vehicle is awesome
4.38 out of 5 stars
Surprise! Great gas mileage
KimWithTwins,02/07/2006
2001 Chevrolet Suburban 1500 2WD 4dr SUV (5.3L 8cyl 4A)
Everyone I talk to groans when they think of a Suburban and the gas it must use. Well, I want to set the record straight that I get 17-20 mpg, and most of the time 18mpg. I'm an at- home Mom, and my driving is a combo of freeway and side streets. It's been super reliable, and my dealer threw in free oil changes for life, which I love.
4.13 out of 5 stars
Impressed by Chevrolet. It's about time!
Zuniga,06/17/2008
2001 Chevrolet Suburban 1500 2WD 4dr SUV (5.3L 8cyl 4A)
I was woried at first about owning an SUV and its reliability from Chvey. All I can say is wo. !I love this SUV! No problems what so ever that set me back. Very reliable. Great size, comfort, and can haul no problem.
See all 80 reviews of the Chevrolet Suburban
Write a review

More about the 2001 Chevrolet Suburban

What's a good price on a Used 2001 Chevrolet Suburban?

Which used 2001 Chevrolet Suburbans are available in my area?

Shop Edmunds' car, SUV, and truck listings of over 6 million vehicles to find a cheap new, used, or certified pre-owned (CPO) 2001 Chevrolet Suburban for sale near. Simply research the type of car you're interested in and then select a used car from our massive database to find cheap prew-owned vehicles for sale near you. Once you have identified a used vehicle you're interested in, check the AutoCheck vehicle history reports, read dealer reviews, and find out what other owners paid for the Used 2001 Chevrolet Suburban.

Can't find a used 2001 Chevrolet Suburbans you want in your area? Consider a broader search.

Should I lease or buy a 2001 Chevrolet Suburban?