1997 Chevrolet Blazer appraisal values can range from $600 - $2,295.
Find out what your car is really worth in minutes.
See your car's value

Those who prefer a liftgate over a tailgate have that option on 1997 four-door Blazers. A power sunroof is a new option for all Blazers, and models equipped with LT decor are equipped with a HomeLink transmitter that will open your garage, among other things. All-wheel-drive Blazers get four-wheel disc brakes, and automatic transmissions are revised for smoother shifting. Early-production 4WD two-door Blazers could be ordered with a ZR2 suspension package. Base Blazers get a chrome grille, while LT four-door models have body-color grilles in six exterior colors. Two new paint colors round out the changes.

Cost to DriveCost to drive estimates for the 1997 Chevrolet Blazer LT 4dr SUV 4WD and comparison vehicles are based on 15,000 miles per year (with a mix of 55% city and 45% highway driving) and energy estimates of $3.26 per gallon for regular unleaded in Virginia.

Back in 1982, Chevrolet rolled out the S-10 Blazer, the first modern compact sport-utility vehicle. Fifteen years later, the Blazer remains a bestseller in one of the hottest automotive markets. It's not hard to understand the Blazer's appeal.

Powered by a strong 4.3-liter, 190-horsepower, V6 engine and offering several suspension choices, the Blazer can be tailored to specific needs; with either two-wheel or four-wheel drive, two doors or four. The four-door is the most popular by far; the model of choice with families on the go.

There are accommodations for as many as six passengers, but four would most likely be more comfortable. Lots of cargo space too, with the spare tire mounted underneath the cargo floor on four-door models. Chevy claims that, with the rear seat folded, a washing machine box will fit into the cargo bay. We tried it with a test vehicle, and they aren't fibbing. Sadly, the Blazer's interior is marred by acres of chintzy plastic and little rear foot room in front of a somewhat low and mushy seat. Adult rear seat riders will complain loudly.

Off-road is not where the Blazer shines, though a heavy-duty ZR2 suspension package is optional this year. Available only on two-door 4WD models, the ZR2 Blazer has a special chassis with four-inch wider track, huge 31-inch tires, specially-tuned Bilstein 46mm shocks, drivetrain refinements, an underbody shield package, and LS trim. Regular Blazers are capable enough for two-track dirt, but serious off-road adventures would be better handled by something with more wheel travel. However, most families don't spend much, if any, time off-road in their sport-utes, so this is not a large shortcoming. As a road going hauler, the Blazer is quite capable. An all-wheel drive option is available on four-door models with LT decor, making the Blazer even more sure-footed.

For 1997, Chevrolet offers an optional liftgate on the four-door Blazer. Standard is a two-piece hatch and tailgate. The new liftgate features separately opening glass and a rear washer/wiper system with rear defroster. A power sunroof is new to the options list, and LT models have a new HomeLink transmitter that will operate up to three remote-controlled systems as you pull up to your estate. Also new to the LT are body-color grilles in six exterior colors; base models drop their gray grille in favor of chrome. Order all-wheel drive on your Blazer LT and you'll get four-wheel disc brakes in place of the standard front disc/rear drum setup. Two new exterior colors debut for 1997: Fairway Green Metallic and Medium Beige Mystique Metallic. Finally, transmission improvements result in smoother shifts.

When the current Blazer debuted for the 1995 model year, it won the North American Truck of the Year award. Smart styling, a powerful drivetrain, and reasonable pricing made it a hit with the public. Lately, however, the competition has caught up with the Blazer. A new V6 engine goes into the more refined Ford Explorer for 1997, and it is more powerful than the Blazer's motor. Jeep updated the Cherokee this year, offering dual airbags and four-wheel drive for less than $20,000. The Blazer isn't the value it used to be. We certainly like this sport-ute, however, poor crash test scores prevent us from recommending it. 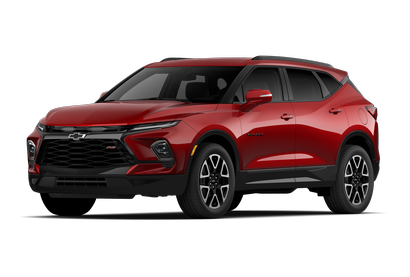 3.38 out of 5 stars
Chevrolet got these right.
kolbpilot,08/10/2011
1997 Chevrolet Blazer LS 4dr SUV
I basically agree with all the positive comments about these series ('95-'04) Blazers. I've driven quite a few vehicles in my life and this second hand, high mileage Blazer I bought continues to impress. Mine has been reliable, so far. Original exhaust, 210,000 miles.
4.38 out of 5 stars
Makes it through the valley of death.
chad1893,03/01/2012
1997 Chevrolet Blazer LT 4dr SUV 4WD
Well it was purchased at 55,000 miles and now has 156,000 miles ive had it for six years recenly handed it down, it packed in the power and was great in snow the 4 wheel drive was great, it sat up high and you'll feel like the navigator of the road. It was hard giving it away i loved it. Had it for awhile it had a great drivetrain.
3 out of 5 stars
4wd nice, guzzles gas and breaks often
Gary,06/28/2009
1997 Chevrolet Blazer LT 4dr SUV 4WD
bought with 45000, since replaced brakes twice, engine, alternator, starter X 2, wiring problems numerous, check engine soon light has been on at least a half dozen times and required many different repairs. The Blazer just turned 100000 and I am having serious transmission problems. I have always loved Chevys, but I doubt I'll ever buy another after this one. The 4.3 is a slug. wife has … a Saturn Vue with the 3.5 Honda engine and it will smoke the 4.3 and gets good MPG. Stay away from the Blazer.
4.38 out of 5 stars
I miss mine
speedboy3000,08/30/2012
1997 Chevrolet Blazer LT 4dr SUV 4WD
This was my second car, and it was the best thing a kid could have. It's 4x4 system got me anywhere and everywhere I wanted to go, places that none of my friends could get to. Loyal, trustworthy, and a real blast. And by real blast, I mean literally. Going over a mountain pass, it threw a rod. Unfortunately replacing the engine would cost as much as the car was worth, so I had to part … with it. I researched if this was a regular problem, and to no avail. This was a fluke. It was a great vehicle and only wearing parts had to be replaced. I would get another in good condition in a heart beat.
See all 76 reviews of the Chevrolet Blazer
Write a review

More about the 1997 Chevrolet Blazer

What's a good price on a Used 1997 Chevrolet Blazer?

Which used 1997 Chevrolet Blazers are available in my area?

Shop Edmunds' car, SUV, and truck listings of over 6 million vehicles to find a cheap new, used, or certified pre-owned (CPO) 1997 Chevrolet Blazer for sale near. Simply research the type of car you're interested in and then select a used car from our massive database to find cheap prew-owned vehicles for sale near you. Once you have identified a used vehicle you're interested in, check the AutoCheck vehicle history reports, read dealer reviews, and find out what other owners paid for the Used 1997 Chevrolet Blazer.

Can't find a used 1997 Chevrolet Blazers you want in your area? Consider a broader search.

Should I lease or buy a 1997 Chevrolet Blazer?